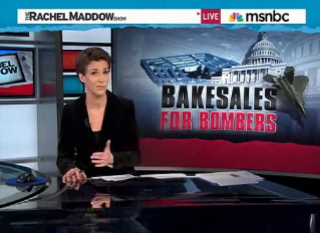 Among the many questions surrounded America’s new coalition venture into Libya– besides what America’s objective is, how long troops will remain there, and how many troops will go there– is how this will affect America’s national debt. This concern comes as a surprise to Rachel Maddow who, as an avowed liberal, had always been skeptical of defense spending, but hearing her concerns voiced by Speaker John Boehner, she explains, is quite the bizarre experience.

Describing “defense” as a “magic word” the military has used throughout history to avoid questioning as to how much money is diverted towards their efforts, Maddow happily reported that, because the war is being staged by a Democrat that Republicans are so desperately trying to remove in about a year’s time, has lost its power. Quoting Speaker Boehner asking for cost estimates for the intervention, Maddow asked rhetorically, “Cost for something the military is doing? In America? We’re worrying aloud about that?”

This “new way of thinking”– which she also described as the “old liberal way of thinking”– had now pervaded much of the right, and not just Rep. Ron Paul (though him too). The fact that the military spending would potentially wipe out the Republican spending costs was causing concern, enough concern to prompt a “mainstream discussion in Washington about money,” and not just the typical grumbles from “commie pinko liberals on the margins.” While all the other details of the kinetic effort are just as important, Maddow hoped “this will be the war where we count the cost while we wage it.”

The segment from last night’s Rachel Maddow via MSNBC below: