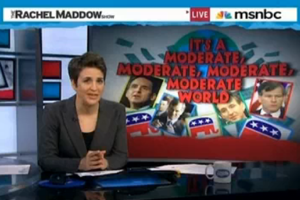 Rachel Maddow senses a trend– the Republicans are polarizing! Sure, this may seem like an obvious conclusion to anyone who has watched a Tea Party rally or looked at a Gallup poll, but Maddow employs a different metric to come to her conclusion: self-proclaimed Republican moderates, she argues, are acting like extremists.The problem is that Tim Pawlenty and Bob McDonnell were never really moderates– they just happen to be boring.

Maddow appears shocked in her findings that Virginia governor McDonnell and Minnesota governor Pawlenty are engaging in some strange behavior. McDonnell was recently attacked for declaring April Confederate History Month. Pawlenty’s infraction was much tamer: appearing on stage with one of his state’s congresswomen, Michele Bachmann, and Sarah Palin. These, Maddow argues, are the party-appointed moderate ambassadors of the GOP, and if the moderates are going around celebrating slavery and fraternizing with people who routinely call for revolution, what can be made of the extremists.

It’s not that Maddow is wrong in identifying the fact that the Republican Party is devoid of moderates– that much is fairly accurate, but the same could be said of Democrats that now count Alan Grayson and, many will argue, the entire Obama administration among their number. To devote an entire segment to the fact that one side of the political spectrum is radicalizing when both sides are equally doing so is misleading.

And even though she’s not wrong about the radical right, Pawlenty and McDonnell are not the greatest examples that prove her point. McDonnell was heralded as a positive addition to the GOP, yes, but never was he praised explicitly as a moderate the way, for example, Scott Brown was. And as for Pawlenty, he is in the unenviable position of being a fairly politically centered, unspectacular Republican that most people can agree is of a pleasant outlook and demeanor. Being moderate, unspectacular, and pleasant are each their own death sentence for a political career in post-Tea Party America; together, for a potential presidential candidate, they are lethal. Meek little Pawlenty is simply out of style. So, like every slave to fashion born without the natural instinct to please his master, he is looking for every possible way to stand out in a crowd where whoever shouts the loudest wins. Allying himself to Palin and Bachmann is a way of getting louder voices to yell out your name. Pawlenty’s struggle for attention has little to do with the overall health of the party.

Here’s Maddow’s segment from last night. Note that even at his most excitable alongside the bad girls of authoritarian conservatism Pawlenty comes off as tame: