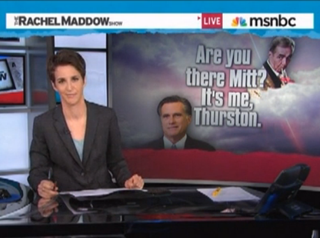 Rachel Maddow tried to take a gander at understanding Mitt Romney‘s political strategy tonight, and it took her all the way to Gilligan’s Island. Maddow tried to make sense of why, in this economy, Romney would say things like “corporations are people” and announce his real net worth, and came to the conclusion that his “inherent awkwardness” was impossible to avoid. To that end, his campaign was going “the full Thurston”– just being open about his wealth, like sitcom character Thurston Howard III.

Maddow went through a list of comments that seemed to make it difficult for Romney to connect on the jobs issue– from the “corporations are people” comment to attacks on the President from vacationing in Martha’s Vineyard. “When people think about Mitt Romney and jobs,” she asked, “what exactly do they think about?” The problem, of course, is that those comments were precisely what they thought about, but they were inevitable at this point.

“Mitt Romney can’t be totally scripted,” she argued, “he has to be let out into the wild… and he keeps saying stuff like that.” She picked out evidence that this may be deliberate, however, remarks in press releases like “‘It is not healthy for rich people to be maligned,’ the executive said.” Then there are his public appearances– say, on Fox & Friends recently– where he actually appears “in front of a row of yachts.” “This has to be a strategy!” Maddow exclaimed, one perhaps plucked from the scripts of Gilligan’s Island.