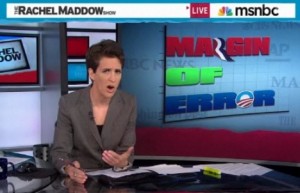 Mitt Romney‘s attack on the very fabric of public opinion polling yesterday was, apparently, not just a way to contemptuously dismiss a voter with whom he disagreed, but part of the launch of a new strategy. On Tuesday night’s The Rachel Maddow Show, host Rachel Maddow detailed an emerging trend of Romney supporters and staffers trying to buck up their own spirits by simply reworking the rules of public opinion polling to make it so their guy comes out ahead. Romney adviser Ed Gillespie continued the rollout on Fox and Friends this morning, and managed only to get resident Mediaite conservative Noah Rothman to agree with Rachel Maddow.

At an Education Nation forum on Tuesday, Republican presidential candidate Mitt Romney responded to a New York City school board member and parent who cited a public opinion poll by telling the man “I don’t believe it for a second. I know something about polls, and I know you can ask questions to get any answer you want.”

It was a ridiculous assertion, calling into question not just the validity of that specific poll, but the very legitimacy of public opinion polling, in general. Now, polls aren’t perfect, and their value is often misunderstood, but there are established scientific methods to public opinion polling, ones which can be applied consistently. If you don’t like how they turn out, though, apparently you can just “unskew” them.

That’s right, as Maddow reports, there’s a website that takes recent polling data and “unskews” it by applying methodology that isn’t consistent with scientific polling practices. In much the same way, you can “unskew” carbon monoxide, and turn it into oxygen that won’t kill you, you just throw some new science at it, take out that anti-breathing bias. As Maddow explains, the creator of the site thinks that pollsters are oversampling Democrats.

“Sampling more Democrats than Republicans,” Rachel says. “Hmmm, that sounds like a reasonable argument. Everybody might have reason to be suspicious of the polls showing President Obama leading if, in fact, pollsters are systemically oversampling Democrats when doing their polling. That’s not what pollsters are doing. They are not going out and looking for too many Democrats for their polls in order to fill some quota to get the liberal result they want. Pollsters polling the swing states are finding more people calling themselves Democrats in those swing states because there are more people calling themselves Democrats in the swing states. It’s not a biassed look at the states. It’s a look at the states that show the states have a Democratic bias.”

I’ve got to give a big, sincere tip of the hat to my colleague, Noah Rothman, who not only patiently explained the same thing on our website this morning, but even compared Romney’s poll-deniers with the residents of Hitler’s bunker. When you’ve got Noah Rothman channeling Rachel Maddow and Dick Harpootlian, you’ve done messed something up pretty bad.

To continue the up-is-down theme on this issue, however, I am going to come to the mild defense of the Romney campaign’s political director, Rich Beeson. Beeson told reporters, yesterday, that the campaign is relying on more encouraging internal poll numbers, but declined to share those internals. Several commentators have pointed to Beeson’s refusal to share those internals as evidence that he’s full of crap.

Here’s the thing about internal polls: all campaigns use them (the Obama campaign is frighteningly adept at this), but they only ever bring them up when their guy is in trouble. In that way, Beeson probably is somewhat full of it. No campaign staffer ever says “I know my guy’s ahead in the Gallup daily, but our internals are for shit!”

However, there’s probably at least a grain of truth to it. Maybe the internals have a wider margin of error, or maybe they show Romney down, but making inroads with a key demographic (namely, all of them except white males). In any case, it’s not really fair to infer anything from the fact that Beeson’s not releasing the internal polls. Even if they’re better than the recent swing-state numbers, they still show Romney losing (Beeson says they’re “by any stretch inside the margin of error in Ohio”), so there’s very little political upside in releasing them. Even if the internals had Romney winning, releasing them would smack of desperation, like showing your friends the perfumed letter your girlfriend in Canada sent you.

There’s also the distinct possibility that releasing the internals might show that the Romney campaign using a polling firm in the Cayman Islands.