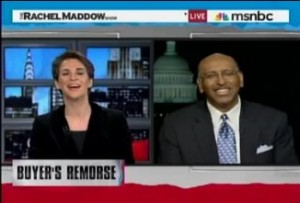 Since the beginning of the standoff in Wisconsin, Republicans and conservatives have predictably cast the “Wisconsin 14” as “cowardly” shirkers who “aren’t doing their jobs,” or have “retreated.” This is to be expected, but what’s really been hard to watch has been Democrats sitting silently by, or even going along with them. That’s why it was so great to see Rachel Maddow destroy this line of reasoning on Tuesday night’s The Rachel Maddow Show, when her “new best friend” Michael Steele trotted it out like a labradoodle at Westminster.

I can’t say I was surprised by the disgraceful sight of two Democratic governors getting Wisconsin 14 sand kicked in their faces by Gov. Nikki Haley (R-SC), or by listening to the likes of former Democratic Rep. Harold Ford, Jr, agree that the Democratic state senators from Wisconsin should “go back to work,” because this is what Democrats are famous for, undermining their own position. Frankly, I’m still not convinced that state Sen. Mark Miller didn’t slip up and almost give away the store in Wisconsin, before being bucked up by his colleagues.

But I was irritated by it, because, whether you agree with what the Wisconsin 14 did, or not, leaving the state to deny Republicans a quorum was clearly an act of principled obstruction, and not cowardice or shirkdom. (Shirkification?)

That such characterizations by opponents are disingenuous is obvious, so when former RNC Chairman Michael Steele calls them “wimpy,” he’s just doing his job. Maddow’s response, though, is a thing of beauty:

I really could not have said it better myself, although I would add that the filibuster comparison only holds up if it is used in circumstances as extreme as the Wisconsin situation, the seriousness of which has been borne out by the overwhelming public outcry at Walker’s overreach. Principled obstruction and obstruction as SOP are not the same thing.