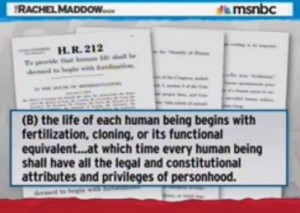 The Obama campaign ran an ad last month which said that Mitt Romney of “supports overturning Roe vs. Wade. Romney backed a bill that outlaws all abortion, even in case of rape and incest,” based on a statement he made at a 2007 debate that he would sign a bill that banned all abortions, and on his repeatedly-expressed support for so-called “personhood amendments,” which Maddow has pointed out before would outlaw most forms of birth control, most IVF treatments, and all abortions.

Politifact rated the claim “Pants on Fire,” based on the “logic” that some personhood amendments contain exceptions for rape and incest, and the life of the mother, and since Romney didn’t mention such exceptions when he expressed support for personhood, that must mean he supports such exceptions. It’s an idiotic bit of logic, like concluding that if I say I like Pepsi, I must really be saying I like Diet Pepsi.

They also “reasoned” that while “some” personhood bills have no exceptions, “the most recent ones do”:

The National Committee for a Human Life Amendment, a Washington-based advocacy group, has compiled the congressional bills in favor of an amendment dating back to 1973. Some of those bills have no exceptions for rape and incest. However, the most recent versions do.

In 2003 Rep. Jo Ann Emerson, R-Mo, introduced H.J. Res 9 which held that “no unborn person shall be deprived of life.” However, the bill adds “nothing in this article shall prohibit a law permitting only those medical procedures required to prevent the death of the mother of an unborn person: Provided further, that nothing in this article shall limit the liberty of a mother with respect to the unborn offspring of the mother conceived as a result of rape or incest.”

If you read that “exception” as if your life depended on it, there’s nothing there that says you’re free to kill the thing they just declared a person, but let’s set that aside for a moment. As Rachel Maddow pointed out on her show last night, there’s an even more recent version of this legislation than the 2003 example that Politifact cites. It’s HR 212, The Sanctity of Human Life Act, and it was co-sponsored by Rep. Paul Ryan. Given the wrecking ball it takes to 50 years of privacy law, the bill is rather short. See if you can locate the exception for rape and incest:

To provide that human life shall be deemed to begin with fertilization.

Be it enacted by the Senate and House of Representatives of the United States of America in Congress assembled,

SECTION 1. SHORT TITLE.
This Act may be cited as the ‘Sanctity of Human Life Act’.

(1) the Congress declares that–

(A) the right to life guaranteed by the Constitution is vested in each human being, and is the paramount and most fundamental right of a person; and

(B) the life of each human being begins with fertilization, cloning, or its functional equivalent, irrespective of sex, health, function or disability, defect, stage of biological development, or condition of dependency, at which time every human being shall have all the legal and constitutional attributes and privileges of personhood; and

(2) the Congress affirms that the Congress, each State, the District of Columbia, and all United States territories have the authority to protect the lives of all human beings residing in its respective jurisdictions.

SEC. 3. DEFINITIONS.
For purposes of this Act:

(1) FERTILIZATION- The term ‘fertilization’ means the process of a human spermatozoan penetrating the cell membrane of a human oocyte to create a human zygote, a one-celled human embryo, which is a new unique human being.

(2) CLONING- The term ‘cloning’ means the process called somatic cell nuclear transfer, that combines an enucleated egg and the nucleus of a somatic cell to make a human embryo.

(3) HUMAN; HUMAN BEING- The terms ‘human’ and ‘human being’ include each and every member of the species homo sapiens at all stages of life, beginning with the earliest stage of development, created by the process of fertilization, cloning, or its functional equivalent.

Even if you buy 100% of Politifact’s ridiculous excuse-making for Mitt Romney (made even more absurd by their other machinations on Romney and personhood), which you should not, it is a fact that Paul Ryan, a man who will be one heartbeat away from the presidency, wants to ban all abortions, most birth control, and most IVF treatments. By selecting him as his running mate, Romney has put that position in the on-deck circle of the White House.

Every reporter who encounters Romney from now until the election should ask him if he agrees, if he supports the Sanctity of Human Life Act. If he doesn’t support it, Romney might want to reconsider putting a guy who believes The Pill is murder on the ticket.