Rachel Maddow: Newt Gingrich Polling Well With Tea Party Because Of His Support Among Senior Citizens 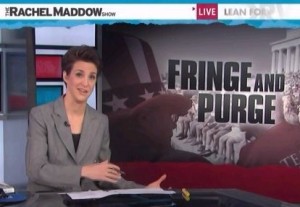 Newt Gingrich is not only the Republican presidential frontrunner right now, but he is polling better than the other candidates with the Tea Party. A recent Gallup poll found that Gingrich has 47 percent of Tea Party support, followed by Mitt Romney with 17 percent. Why would such a recognizable insider politician like Gingrich be getting the most support from Tea Partiers? Rachel Maddow examined this very question on her show tonight and concluded that Gingrich’s high poll numbers among senior citizens are helping him in Tea Party polls.

Maddow claimed that when you examine the demographics of the Tea Party, “it tends to be made up of old people.” However, as Maddow explained, it is precisely because of this that they are more knowledgeable of federal programs like Medicare and Social Security than some liberals would believe. What the Tea Party opposes isn’t government programs, it’s government programs supported by younger people and poor people.

RELATED: Chris Hayes On Gingrich: Hard To Think Of Anyone More Widely Reviled And Polarizing

These statistics are some of the findings in a new book about the Tea Party and its relationship with the conservative movement. It also finds that the “distinction between workers and non-workers… is central to the Tea Party worldview and conception of America.”

So what does this have to do with Newt Gingrich’s rise in popularity among senior citizens? Maddow explained it was because of how much Gingrich has been setting his sights on younger, poorer people in his comments about child labor laws and elsewhere. And that is why Newt Gingrich, a man very few would confuse with a Washington outsider, is polling well with the Tea Party and seen as a threat to the Republican establishment.