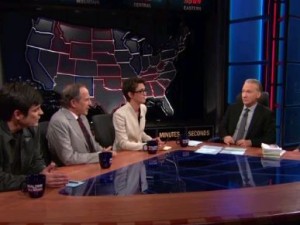 Once the televised show was over, Bill Maher shepherded his (fairly contentious) panel into the online-one Overtime segment, where the group answered a rapid-fire round of questions about everything from the increase in Asian immigration to why Cleveland insists on hating LeBron James.

The first question in the segment was about how America will change given the high number of Asian immigrants coming into the country. “We’ll have fewer Ls and Rs in our language,” Mort Zuckerman joked, before adding, equally stereotypically, “The Asians, I have to tell you, certainly in New York City, are the most remarkable community imaginable… they’re the most serious, their kids are wonderful in school.” “Very high test scores, we’ve all cheated off of them,” Maher added.

The panel got much more excited about arguing over the Miami Heat’s victory this week, with Maher arguing that it made no sense for Cleveland to be mad at LeBron James. “Do we all want to live in Cleveland for the rest of our lives? Is that what America is all about?” he asked, to which Nick Gillespie added they were probably just upset not to go with James to his new venture. “We can’t all live in Miami,” Maher retorted, before Mark Ruffalo and Rachel Maddow got into an excited, way too inside baseball (basketball?) discussion on the NBA season for this editrix to follow.

Thankfully, this gave way to a debate on Obamacare once again. “This Supreme Court is kind of an out there Supreme Court,” Maddow asserted, by way of arguing that it was likely the Affordable Care Act would fall before the Court. The panel (Gillespie the notable exception) seemed all to agree that single-payer would be a preferable option to Obamacare– even Zuckerman, which was a shock to Maher. “I care about good health care at a reasonable cost,” Zuckerman explained. Following the Medicare model, Gillespie argued, however, would not work. “Literally everybody who pays into it gets more out of it eventually; it is the definition of unsustainable,” he argued, while Maddow pointed to signs that seniors were overwhelmingly pleased with Medicare.

Maher concluded the show himself, declaring: “the problem with Obamacare is not socialism, it’s capitalism.”

The clip via HBO below: