Rachel Maddow On NPR As Election Issue: Will GOP Go After Big Bird Next?
video

Rachel Maddow On NPR As Election Issue: Will GOP Go After Big Bird Next? 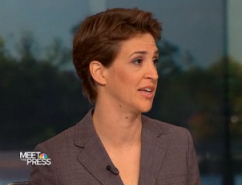 Not surprisingly the subject of Juan Williams came up on today’s (excellent) Meet the Press roundtable. Much of the political fallout from Williams’ sudden dismissal has focused on the government funding NPR receives and a number of the usual political suspects have called on Congress to investigate whether the government should be funding NPR at all if they are simply going to fire people willy nilly for expressing controversial views on Fox News.

Before I get into WaPo‘s E.J. Dionne‘s scathing remarks about Fox News being propaganda machine, it’s probably worthwhile to point out that NPR gets about 2% of its funding from the Government. From Politico:

Congress doesn’t directly fund NPR, but rather funds the CPB [Corporation for Public Broadcasting] — which distributes money through a variety of channels, some of which lead to NPR. But NPR only gets about 2 percent of its funding from the CPB…currently $161.8 million…However, this does not count the 40 percent of its budget that comes from member stations, who themselves get $90 million from the CPB, according to the CPB.

Neither NPR nor the CPB could say just how much of that $90 million in CPB money goes back to NPR, though a NPR spokeswoman said it amounted to an average of 10 percent of each member station’s annual budget.

You can find a longer explanation of how NPR is funded here. But the short version is it is not as simple as cutting off Gov. money. It’s probably also worth noting, as NPR’s CEO Vivian Schiller did the other day, that NPR’s audience of 34 million has grown by 60% in the last two years.

And now back to the MTP roundtable. Here was E.J. Dionne‘s response when Gregory asked whether NPR had got the Williams firing wrong:

There are two issues here. NPR is quite simply one of the best news organizations in the world. And anybody who thinks that they are liberal biased, I challenge them to take a week of transcripts, a month of transcripts and examine it for political bias. You won’t find it. Fox News, on the other hand, is a Republican Propaganda network that put into circulation the false idea that President Obama went to a madrassa and stoked the tea party– not the tea party movement but the death panels. That said, NPR handled this wrongly. They should have sat Juan Williams down, he has done a lot of good work for them and said you have a choice here. Look at the context you were on. You could barely get your points out in the middle of propaganda. You want to work for Fox, that’s okay, you want to work for us, that’s okay, but you’ve got to decide, to use Fox’s slogan.

Indeed. Meanwhile, Rachel Maddow had this to say:

It may be an election issue if Jim DeMint leads the Republicans on this, and the Republicans like they did with Newt Gingrich in power, decide they’re going to go after Big Bird and go after him like they went after the NEA and wage culture war again.

Watch below. It will be very interesting to see whether NPR comes out of this week’s fundraising drive with more or less money than they usually raise.