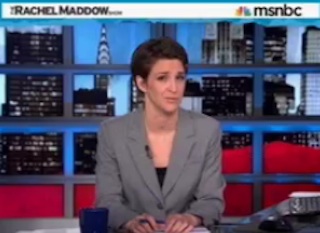 On the heels of her tête-à-tête with Republican strategist Alex Castellanos over the facts of pay equity on Sunday’s Meet The Press, Rachel Maddow doubled down on her argument during her MSNBC program Monday, this time, with CNN’s fact-check team on her side.

Castellanos had disputed Maddow’s arguments on Sunday’s show, claiming there was no disparity in gender pay, saying that “not only do men work more hours a week than women, but men tend to go for professions that pay slightly more than women.” “I love how passionate you are,” Castellanos told Maddow at the time. “I wish you were as right about what you’re saying as you are passionate about it. I really do.”

Earlier Monday, CNN’s Lisa Sylvester fact checked Castellanos’ claims, and found he was in fact wrong.“Castellanos makes two points: that men make more because they work more and they go into professions that pay higher salaries,” she said. “But data directly from the Census Bureau shows there is a pay gap and it’s real.”

Maddow returned to the subject during her show, and reaffirmed her argument that women made less than men.

“Overall, if you aggregate everybody working in the economy in every job,” she said, “women get paid 77 cents for every dollar that men get paid. For the same work, dudes get paid more.”

If you recognize that there’s a problem with women getting paid less than men, a political party opposing or refusing to support policy to fix that problem seems like hostility toward women’s interests. If you don’t recognize there’s a problem with women getting paid less than men, then policy debates about how to fix something that’s not a problem don’t seem that important to you and so you downplay the importance of policy and you can’t understand why everybody keeps saying this war on women thing is going on. And your 17-point deficit with women voters, that’s just the product of not putting your candidate out there with enough women standing next to him regardless of how they vote and what they think. That brings us to what’s going be a central bet in the campaign, a central question. Does the country live in Republican world? Where women are getting paid less than men, somehow isn’t a problem…The Democratic side is making a bet that general election voters are not Republicans on the set of “Meet the Press.” They are betting that the average general election voter does not live in Republican world but rather in the reality based community where facts are useful for understanding what problems are and policy is useful for solving those problems.

Watch Maddow double down on her argument that women make less than men below via MSNBC: