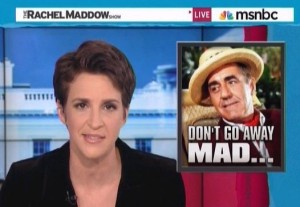 Rachel Maddow may have spoke too soon when she said last night that we may never be able to hear from Mitt Romney again, because during a conference call that came out today, Romney said he lost the election because President Obama promised voters “gifts.” Maddow highlighted Romney’s comment to make a point that many Republicans are publicly rejecting what he said, forcing them to specifically explain what is wrong with that line of thinking.

RELATED: White House Hits Back At Romney’s ‘Gifts’ Remark: It’s ‘At Odds With The Truth’

“Republicans are obviously furious with Mitt Romney for these latest comments for continuing to spotlight the most alienating, most elitist, most resentment-driven weaponized Thurston Howell ideological edge to what Republicans are offering the country, so you can see why they would be so angry at him.”

Maddow concluded that Americans should thank Romney for continuing to remain in the public eye and insisting that he did nothing wrong, because he is forcing other Republicans to specifically “articulate what is wrong with that way of thinking.” Maddow saw this as a positive step for the GOP.