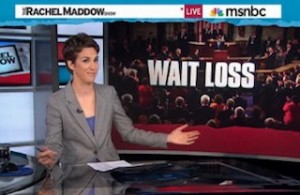 On her MSNBC program Monday, Maddow reported that Boehner had complained there would be important votes scheduled for Wednesday that Obama’s address would conflict with and thus could not be interrupted.

“With the significant amount of time — typically more than three hours — that is required to allow for a security sweep of the House Chamber before receiving a president, it is my recommendation that your address be held on the following evening, when we can ensure there will be no parliamentary or logistical impediments that might detract from your remarks,” Boehner wrote in a letter to President Obama

The alleged votes that couldn’t possibly be missed turned out to be a roll-call vote authorizing the use of the Capitol grounds for the Law Enforcement Torch Run, a “charity jogging event,” and a congratulations to a North Carolina softball team for making the Little League World Series. “One vote and some non-binding speechifying,” a clearly steamed Maddow lamented.

Maddow noted that no speaker or Congress had ever before told a President to move an address to Congress in US History. Maddow exclaimed, “That is unheard of!” Even before these alleged important votes were made public, Mediaite‘s Tommy Christopher was so angered by this insult to the President that he called for Boehner to resign.

Maddow also called out the four Republicans from the South who didn’t even bother to show up for the speech despite it being rescheduled. “They didn’t have the time,” Maddow zinged.

“There is apparently something about this president that erases the need for whatever deference Congressional Republicans might otherwise feel toward the office that President Obama holds, I would love to hear them explain exactly what that is.”