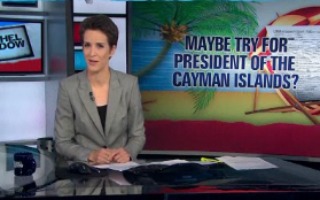 In a segment titled “Maybe Try for President of the Cayman Islands?” MSNBC’s Rachel Maddow took viewers back in time to an interview Mitt Romney gave to ABC in July during his visit to Israel and Europe. In that interview, Romney said that he didn’t pay more in taxes than were legally due to and, if he had, he wouldn’t be qualified to be president.

It’s an odd assertion to make, Maddow said, particularly given that Romney’s father had been very open during his own run for president about having not taken advantage of certain tax breaks, considering he was already quite a wealthy man. Is Romney saying that his own dad was not qualified to run for president?

Returning to the present, you’re all likely aware that, at 3 p.m. on Friday, Romney’s campaign released the candidate’s 2011 tax returns, which revealed that he had paid an effective tax rate of 14.1 percent — a lower tax rate than some of us (your humble blogger included) pay, to be sure, but actually a higher rate than he could have, given that the Romneys claimed a lower deduction for the millions of dollars they gave to charitable causes.

“Why would the Romney campaign put their candidate in the position of declaring himself unqualified to be president?” Maddow asked, before answering her own question. “Because, last month, Mitt Romney declared to the country, in another interview, that he had never paid less than 13 percent in taxes at any point over the last ten years. He had always paid more than 13 percent.” But, despite what he’d said, it turns out that, according to the math, that was not going to be true. So, Maddow explained, accountants went back and “artificially inflated” his tax rate so that it would match up with what he had said last month.

“This is nuts!” she declared.

Plus, she continued, Romney’s tax rate is actually quite a bit lower than that of the average millionaire, who pays something closer to 25%. And he was able to manage that, Maddow noted, by actively trying to pay less — including decades of “one tax avoidance scheme after another,” a few of which she listed, including one involving his wife’s dressage horse.

“Mitt Romney’s entire adult life has essentially been one long, boring plot to dodge taxes,” she said. “That what rich people — certain kinds of rich people, right?” She pointed to discrepancies between his previous disclosures and summaries and his actual financial activities and holdings, and also noted that, unlike Romney, Paul Ryan was made to hand over ten years’ worth of tax returns.