Rachel Maddow: Ron Paul Is Different Because He Has Lost The ‘Murdoch Primary’ 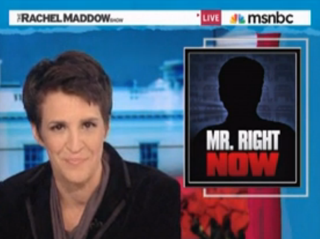 The news last night that Rep. Ron Paul has emerged as the frontrunner in Iowa seemed to shake many preconceptions about the Republican Party at their core, and tonight Rachel Maddow used the new data to come to the conclusion that it was a sign Iowa Republicans were not exactly sure what they wanted in a Presidential candidate. But beyond the politics of a party that can shift so quickly to Rep. Paul from Newt Gingrich, Maddow saw the rise of Rep. Paul as a sign that another force in politics was being negated: the repeated efforts of Fox News to portray Rep. Paul as a bad candidate seem to be falling on deaf ears.

RELATED: Ron Paul Goes Off On Going To War With Iran: We Are Going To Start A War Over A Drone?!

The poll numbers, to Maddow, reflected several truths for various candidates: for Gingrich, the fact that he had dropped eight points was a bit of a problem. For Mitt Romney, it was “rarefied air” to see Rep. Paul rising after a significant attack on Gingrich. That said, the reason for Rep. Paul’s rise was unclear, given the rise and fall of every other candidate who is vastly different from Rep. Paul. “Iowa Republicans don’t seem to want any particular thing,” she noted, “they seem to want everything– in turn.”

She then looked at the other half of her argument– that the tension between Rep. Paul and Fox News did not seem to hurt him. “It is possible to be a frontrunner in Iowa without wining the Murdoch primary,” Maddow argued, playing an extensive reel of segments on Fox News in which a host or guest spoke ill of Rep. Paul. It was a different sort of attack than other candidates received, according to Maddow. “For a while, when Mitt Romney was really losing the Fox News/Murdoch primary,” she explained, it was clear because he was not featured. Instead, Fox News has taken to “talking smack” about Rep. Ron Paul.

The bad news for Rep. Paul, according to Maddow, was that “Iowa itself doesn’t much matter in the process of picking the Republican nominee for president anymore.” What’s more, the fact that he was the representative of small government in a party of small government that also supports the war on drugs and aggressive foreign policy did not bode well, either, unless, she argued, citing an clip of George Will debating Rep. Barney Frank on drugs, there is a viable “Barney Frank/Ron Paul wing of the Republican Party.”