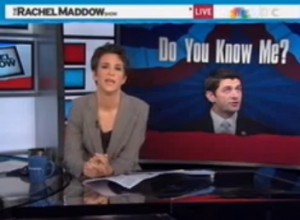 While discussing the bumpy roll-out of vice-presidential candidate Paul Ryan on Friday night’s The Rachel Maddow Show, host Rachel Maddow took a casual-yet-NFL-hard shot at influential DC blog Politico.com. Describing the pivot that Mitt Romney’s campaign has made away from Ryan’s one known strength, his vaunted “wonkiness,” Maddow quoted a leak-soaked Politico piece that laid out an explicit strategy of detail-avoidance (“suicidal” detail avoidance), calling the site “effectively their (Romney/Ryan’s) campaign newsletter.”

The segment itself was one of Rachel’s patented storytime political essays that began with a nostalgic look at some old American Express ads, and ended with Rep. Paul Ryan, whose rough first week (busted on Medicare, double-busted on the stimulus) threatens to land him in one of those “Do you know me?” ads.

But it was Maddow’s uncharacteristically mean shot at Politico that got my attention (she is, after all, the Queen of Nice). I hadn’t read the article, only seen that the Obama campaign had sent it around to reporters with a statement entitled “Ryan Avoids ‘Suicidal’ Details of Medicare Voucher Plan In FL.”

“Mitt Romney and Paul Ryan know a detailed debate about their Medicare voucher plan is politically ‘suicidal’ so they’re not telling the truth about its impact on current seniors. Congressman Ryan didn’t tell seniors in Florida today that if he had his way, seniors would face higher Medicare premiums and prescription drug costs, and would be forced to pay out of pocket for preventive care. He didn’t say that if he had his way, Medicare would be bankrupt in just four years, or that he would give $150 billion taxpayer dollars back to private insurance companies, which raises costs for everyone. He didn’t say that they’d turn Medicare into a voucher system, ending the Medicare guarantee and raising costs by $6,400 a year for seniors. And he certainly didn’t say that they’d do it all to pay for tax cuts for millionaires and billionaires. But those are the facts, and the ‘substantive’ debate he claims they want requires Romney and Ryan to be honest about them.”—Danny Kanner, campaign spokesman

My initial reaction was that, in all fairness to Politico, all political campaigns leak stuff to Politico, because their wide, influential readership is one of the best ways to get their messaging out. Unfortunately for some, like the Obama campaign, their official leaks sometimes get bundled together with other anonymous sources, and Politico delivers them something like “Obama plan: Destroy Romney,” origin of the “Kill Romney” lie.

But, as Mitt Romney would say, pass me some gander sauce. Politico seems to have done a job on Romney with that “suicidal” quote, right?

Not exactly. The quote was in there, but the piece, entitled “Mitt Romney and Paul Ryan pursue united front strategy,” is a textbook piece of stenography made up entirely of leaked quotes from Romney campaign officials, and feather-light analysis that takes disputed facts for granted. From reading Politico’s piece, for example, you would never know that there’s any disagreement on whether President Obama‘s plan “cuts” Medicare.

Official leaks are the new normal in political journalism, but who gets them, who gets that kind of access, ought to be dependent on the reach, professionalism, and fairness of the reporters, not on how closely they’re expected to stick to the campaign’s talking points.

Here’s the clip, from TRMS: