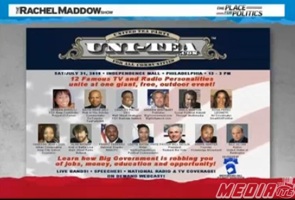 Last night Rachel Maddow reported on the so-called “expulsion” of Mark Williams and the Tea Party Express from the larger “Tea Party Movement.” Williams was “booted” after he crafted what many thought to be inappropriate parody that played upon racial tropes and stereotypes. “How does one get kicked out of a movement?” Maddow asked, barely keeping her schadenfreude in check as she outlined the byzantine structure that is the Tea Party movement.

The Tea Party movement is an abstraction; an amorphous group of citizens who share the similar ideological frustration with what is seen as an out-of-touch, out-of-control, corrupt, and unfair government. While the Tea Party movement has expressed outrage with both the Democratic and Republican parties, its followers are, for the most part, considered right-of-center. Therefore the movement has been co-opted by a number political leaders and opinion media from the right. But there are many, many “sects” of this movement, which Maddow outlines below.

It is true that there are a number of business leaders, thought leaders, and plain old hucksters that are looking to profit off of this “movement,” many of whom Maddow outlines here. Later in the segment, she brings on Washington Post columnist (and MSNBC contributor) Ezra Klein, who questions just how effective the Tea Party movement has actually been. Klein points to Sharon Angle‘s nomination for Republican senate candidate, running against Harry Reid, as an example. Angle got the nomination largely due to Tea Party support, and while Reid was once thought to be a lame duck candidate sure to be voted out, he is now up in the polls.