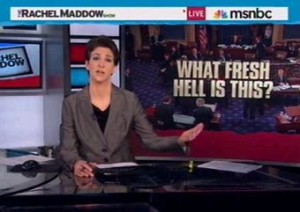 For the first time in our nation’s history, the nominee for a presidential cabinet position was filibustered in the Senate. Rachel Maddow marveled at how Republicans like Lindsay Graham were willing to break with precedent by blocking Chuck Hagel‘s nomination for defense secretary reaching the Senate floor in order to get more answers on Benghazi, a topic that is only tangentially related to Hagel. Maddow said that the filibuster sets a new tone for “how the presidency is treated,” calling it a “fresh hell in American politics.”

Maddow pointed out that in the case, there have been Cabinet nominees that never made it through the Senate due to lack of support, and there have been past threats from the minority party to filibuster nominees, but this is the first time in history it has actually happened. Maddow singled out senators Graham, John McCain, Roy Blunt, and Roger Wicker for previously going on record opposing a filibuster only to renege on their word today.

Maddow tore into Graham for trying to deny it’s a filibuster, pointing out that his attempt to get more information on Benghazi is a ridiculous justification since Hagel knows nothing about Benghazi and had nothing to do with it. At least, Maddow reasoned, it would have made some sense to do this with John Kerry‘s nomination, but as for why the GOP decided on Hagel instead, Maddow could only imagine.

Maddow ended by pointing out that Senate Majority Leader Harry Reid initially pledged that the new Congress would take on filibuster reform, only to go back on it and instead settle for a “gentleman’s agreement” with Republicans not to abuse the filibuster. Maddow asked, “How’s that going?”