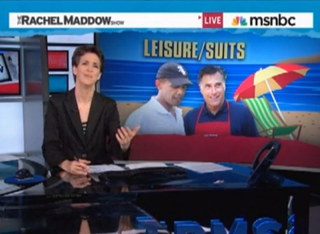 President Barack Obama‘s Massachusetts vacation has Republicans up in arms, especially in light of him not providing a jobs plan before heading off to Martha’s Vineyard. On her program tonight, Rachel Maddow tried to make sense of the right-wing critiques, from the amount of vacation time to mocking his “Aerosmith” bus to Mitt Romney mocking Martha’s Vineyard while staying in a nearby neighborhood in his home state.

Maddow began by pointing out the email the Republicans sent out to supporters today about the vacation, packed with “as much furious smark as they could muster.” The email began “Dear Prez-O” and ended “P.S.– Aerosmith wants their tour bus back.” Maddow noted that the letter was signed “the people of Massachusetts” and left out a few relevant details– namely that the bus the President was using “was a purchase made by and a decision made by the Secret Service,” and that a second model was made for the 2012 Republican nominee, one that person is chosen. Throwing her hands in the air, Maddow wondered what Republicans would say about the bus when their nominee rode it, noting that behind the campaign to ridicule the bus was Karl Rove, who said “we’re going to make a star out of Obama’s million dollar campaign bus.”

Then there’s the actual number of days the President has been on vacation since his tenure began, which Maddow noted to be significantly lower than many other presidents. While President Obama has taken 61 vacation days, she noted, President Reagan took 112, and President George W. Bush took 180. And President Obama’s will be in Martha’s Vineyard, a place Romney poked fun at today for having plenty of Democrats, but in which he will be having a fundraiser this week. “I know that hypocrisy is the crime that has no punishment in politics,” Maddow sighed, but still found “something salient in how brazenly stupid it is.”

She then welcomed guest Eugene Robinson, who agreed that such tactics were both common and frustrating. The reason behind so much of such rhetoric, he explained, was that “as a general rule, you don’t lose as much as you potentially gain”– the incentive to point out faults that could hurt a candidate is too strong. He did add that there was a legitimate question to ask: “whether this vacation has the right kind of optics for this time,” but that it was an entirely different question to the swipes at the bus or the location currently underway.