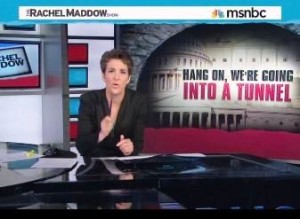 We’ve already done extensive reporting and analysis on the emails (that weren’t actually emails), which Republicans leaked to ABC News’ Jonathan Karl and CBS News’ Sharyl Attkisson in order to revive the flagging Benghazi talking points “scandal,” which you can catch up on here. On Thursday night’s The Rachel Maddow Show, host Rachel Maddow lit into ABC News like a spelunker with a halogen spotlight, demanding a correction from the network, and advising reporters who fell for the Republican leaks to burn their sources.

In case you missed it, ABC’s Jon Karl published a report, last Friday, that included what he represented as direct quotes, from emails that he had “obtained,” implicating the White House in an effort to provide cover for the State Department when formulating the Benghazi talking points. On Saturday, CBS News’ Sharyl Attkisson also released what she claimed were emails from the discussion of those talking points. On Tuesday, Jake Tapper published an actual email from White House adviser Ben Rhodes, which revealed Karl’s and Attkisson’s supposed emails to be fakes, inaccurately paraphrased by Republican sources. On Wednesday, the White House released the full email chain, which revealed further discrepancies between the actual emails and the ones Republicans invented.

It is in this context that Rachel Maddow ripped ABC News, describing hoe the Benghazi “scandal” had failed to gain any traction until “This time last week, ABC news blew this story wide open,” adding “When I say they blew this story, I mean seriously, they totally blew it.”

“He did create a storm,” Maddow said. “The ABC report caused all three network newscasts to report on the scandal of Benghazi,” and added that “then Sunday morning, oh, boy, all four Sunday morning talk shows. ABC and NBC and CBS and Fox News Sunday, all leading with Benghazi.”

“Wow, thanks, Jonathan Karl. Thanks, ABC. Now this is the biggest story in the country because of the damning e-mails that ABC News said it had obtained,” Maddow said, sarcastically, and if you don’t trust Maddow’s assessment of the significance of the invented quotes, then check out Major Garrett‘s.

She then played one of several news clips that exist of ABC anchors saying “in an e-mail obtained by ABC.”

“Obtained,” Maddow said. “Obtained by ABC. This is ending up being the key point there. An e-mail obtained by ABC. ABC said overtly they had obtained these damning White House e-mails. And then in their reporting, which again blew this whole story into a national mainstream news story for the first time ever, which has taken a week to even dissipate, ABC printed what they said were direct quotations, from these e-mails that they said they had obtained.”

She went on to explain how Karl’s emails were revealed not to be emails, and that “ABC bizarrely decided to update their story, but not correct it. Decided not to apologize for it, or retract the false thing they published.”

Rachel then explained that the source of these “emails” was congressional Republicans, who provided summaries that included things that weren’t actually in the email chain, and omitted significant details.

“That report that was given to reporters was a false report,” she said. “It made up something that the White House supposedly did, that the White House did not do. And they shopped that false report to ABC News, and ABC News bought it hook, line and sinker, and published it as an exclusive, and all of the beltway media and everyone in politics jumped.”

Maddow went on to say, of ABC News, “You know what, when you get used like this, and you publish false information, false quotes, you have to correct it,” and offered “a note to my journalist pals, who got involved in this scandal. If your source lied to you, they are not actually a source. They are a con artist, and you are their victim. It means you don’t have to protect them any more. They are not a source. When you get lied to, when you are a tool of somebody else’s deception, when you get lied to, the person lying to you is no longer a source. They are news. Their lie to you is, itself, news, and can you report that news.”

Since Attkisson never explained her reporting, this may well be true of her, but Jon Karl, unfortunately, is not free to burn his source. Karl has admitted that his emails were actually Karl “quoting verbatim a source who reviewed the original documents and shared detailed notes.” His source never lied to him, at least not about what he was giving him. It wasn’t the source who represented Karl’s reporting as actual emails. The source has cover to tell Karl that the discrepancies were good faith errors, which means Karl can’t burn him. If Attkisson’s source represented the summaries, to her, as the actual emails, then Maddow is right, that source can be burned.

She finished with ABC News by imploring them to “fix it. You put it in quotes. It was a quote. Have to fix it. You have to correct it.”