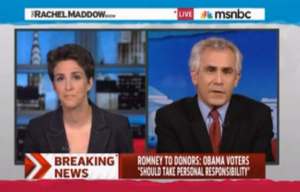 On Monday night, Rachel Maddow took on Mitt Romney in light of the video that Mother Jones posted today in which Romney speaks about the “47 percent of Americans” who will vote for President Obama “no matter what,” given their dependency on government.

The video, from a private fundraiser, has been garnering attention since Mother Jones‘ David Corn posted it — in particular for the following remarks:

[Romney:] There are 47 percent of the people who will vote for the president no matter what. All right, there are 47 percent who are with him, who are dependent upon government, who believe that they are victims, who believe the government has a responsibility to care for them, who believe that they are entitled to health care, to food, to housing, to you-name-it. That that’s an entitlement. And the government should give it to them. And they will vote for this president no matter what…These are people who pay no income tax.

Romney went on: “[M]y job is is not to worry about those people. I’ll never convince them they should take personal responsibility and care for their lives.”

Maddow noted that excerpts of video of seemingly the same speech have been posted in the past couple months, but were unable to be authenticated, and thus the story went nowhere.

The Romney campaign isn’t disputing the video, Maddow noted, referring to their statement:

“Mitt Romney wants to help all Americans struggling in the Obama economy. As the governor has made clear all year, he is concerned about the growing number of people who are dependent on the federal government, including the record number of people who are on food stamps, nearly one in six Americans in poverty, and the 23 million Americans who are struggling to find work. Mitt Romney’s plan creates 12 million new jobs in four years, grows the economy and moves Americans off of government dependency and into jobs.”

“It’s shocking that a candidate for president of the United States would go behind closed doors and declare to a group of wealthy donors that half the American people view themselves as ‘victims,’ entitled to handouts, and are unwilling to take ‘personal responsibility’ for their lives. It’s hard to serve as president for all Americans when you’ve disdainfully written off half the nation.”

Noting that she wasn’t pressuring him to release his source, Maddow asked Corn whether he’s sure the source doesn’t have some sort of anti-Romney motivation. Whether the clip released is in any way taken out of context.

Maddow herself said she found Romney’s comments “raw and grating,” despite how others may attempt to spin it. Romney’s equating nearly half the electorate with a mass of “parasitic moochers,” Corn remarked, which is “simply not true.”