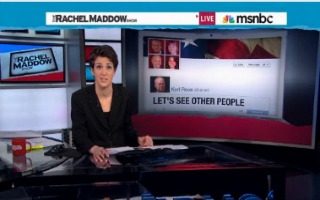 On Monday, MSNBC host Rachel Maddow chronicled a trend frustrating Republican Party officials – the lack of viable candidates who can run for statewide races that can also win in GOP primaries. She discussed Karl Rove’s intention to form a PAC that would support politically viable Republican candidates against far-right primary challenges. Maddow noted, counterintuitively, that the tea party has a point when it claims that Rove is attempting to protect weak candidates from GOP voters who favor a purer brand of Republicanism.

RELATED: Maddow Goes After The Half Of American Politicians Who Live In An ‘Evidence-Free Right-Wing World’

Beginning with an upcoming special election to fill the Senate seat vacated by Sen. John Kerry (D-MA), Maddow noted that the Democratic field of candidates is already set. Massachusetts Democratic Reps. Edward Markey and Stephen Lynch are set to faceoff in an April primary. The list of potential Republican candidates who may run for Kerry’s Senate, however, seat keeps shrinking.

Maddow reported that the “merry pranksters” at Daily Kos took the opportunity of former Sen. Scott Brown’s announcement that he would not run in the upcoming special election to begin a campaign to draft former Republican presidential nominee Mitt Romney into the race. What followed were rumors that both Tagg Romney and Ann Romney were considering a Senate bid.

“Republicans in Massachusetts just itching to get a Romney, some Romney, any Romney back on the ballot this year,” Maddow said. She conceded that the Romney clan has ether indicated or stated explicitly that they will not run for Senate.

The only viable candidate who could potentially seek Kerry’s seat as a Republican is Fox News Channel contributor Dr. Keith Ablow, Maddow reported. She quoted the FNC commentator who said that he would run for Massachusetts Senate so long as there is the GOP primary was uncontested.

Maddow then turned to Iowa where Democratic Sen. Tom Harkin announced his intention to retire at the end of his term. She said that “tea party, birther guy” Rep. Steve King (R-IA) is the most likely candidate to receive the Republican Party’s nomination for Senate 2014. Maddow cited polling data which showed, however, that King is unlikely to win a statewide race.

She tempered Democratic enthusiasm when she cited the same poll showing Rep. Tom Latham (R-IA), a more moderate Republican officeholder, could win a statewide race against the likely Democratic nominee for Senate in the Hawkeye State.

Maddow chronicled the reaction to this plan from tea party groups which has been, unsurprisingly, cold. She said that these groups have a point in the fact that the GOP could be seen as circling the wagons around candidates who perform poorly in office merely because they are electable.

Is it good politics for the Republican Party establishment to block the will of the voters by propping up candidates who could otherwise not win their party’s primary? That question will have an answer before the votes are cast in 2014.