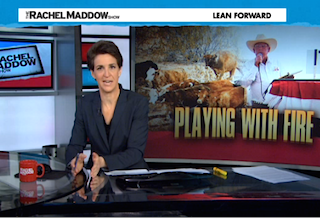 Rachel Maddow opened her show Wednesday night with an extended examination of the Bundy Ranch standoff and how some on the right have transformed it from a local story about a rancher raising cattle on federally-protected land into a national narrative about patriotism and freedom. Ultimately, Maddow concluded that the most dangerous coverage was coming from Fox News.

After sharing some of the more out-there conspiracies theories about the Bundy Ranch story from right-wing websites like World Net Daily, Maddow demonstrated how those theories have seeped into Fox’s coverage. “What is cockamamy and hilarious and sometimes even a little sad on the right,” Maddow said, “it becomes something else when a media institution called the Fox News Channel decides to promote the worst of this stuff, when they drag this stuff up out of the far right, pitiful fringe and turn it into a national conservative cause célèbre.”

Maddow explained that Fox was not only “building up” rancher Cliven Bundy as a conservative hero and “hyping this confrontation” before this past weekend’s standoff, but after it ended without anyone getting shot, Fox personalities seemed “palpably disappointed” and have since “gone into overdrive” to get the armed conflict started again.

As evidence, Maddow played clips from Fox’s The Five and also from Hannity, which led its coverage of the standoff Tuesday night with a story that originated on World Net Daily. “This is what’s happening on Fox News Channel right now in prime time, in case you haven’t been watching,” Maddow said. “This actual story in Nevada is dead, it’s over. At least the threat of armed anti-government zealots having a shooting war with the federal government seems to have cooled down a little bit. But the Fox News Channel, in all its glory, is doing everything it can to try to bring that threat back.”

“On the one hand, it’s hilarious and pitiful,” Maddow continued. “On the other hand, it is playing with fire.”