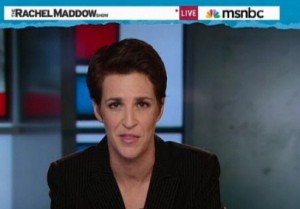 For those of you who love a good feud (and who doesn’t, right?), MSNBC star Rachel Maddow has attracted the Eye of Mordor that is Koch Industries’ PR department, and on Thursday night’s show, made the most of her appearance in their field of vision. Taking aim at Koch Facts’ relatively weak reaction to a blog post by Maddow producer Laura Conaway, the host excoriated the company for fighting legislative efforts at job creation, trashed them for picking on her producer by name, and challenged the Koch brothers to “man up” and come sit for an interview.

In this clip, Maddow goes after the Koch brothers with all the relish at Wrigley Field, slamming the brothers for their funding of groups like Americans For Prosperity, and attacking the narcissism symbolized by David Koch‘s “mint(ing of) dimes with his own head like he was Caesar.”

She then goes on to outline the current feud, and concludes with some tough talk. “Charles Koch, David Koch, you are trying to intimidate the wrong people,” she says. “This kind of thing is as pitiful from billionaires as it is from anyone. So I reiterate my many earlier invitations. come sit for an interview. I would love you have you. Come sit for an interview and let’s talk this out, rather than having daddy’s company attack my producers one by one, by name. Feel free to man up any time. Your beef is with me. so let’s do this face to face right here any time. ”

It all started last week, when Laura Conaway posted a map of Koch Industries job openings, while noting the herculean efforts the namesake freres have put into ensuring a near-limitless supply of available workers. The premise was fairly easy to digest: let the millions of people we helped put out of work fight over 1,240 pieces of cake. The problem isn’t the 1,240 job openings, it’s the opposition to President Obama’s attempts to create millions more jobs, and the support for spending cuts that cost still more jobs.

Not surprisingly, Koch’s PR department, deliberately or not, misunderstood. This is their predictable 2-paragraph rebuttal:

Last week on the Rachel Maddow blog, writer Laura Conaway criticized Koch for announcing that we are looking to hire more than 1,240 people around the country. At least, we think it was a criticism. Conaway’s point appears to be that, unless we offer enough job openings to everyone that is unemployed, any number of openings is objectionable. But if that’s the case, couldn’t the same argument be made against MSNBC itself? We took a look at the the job listings that MSNBC posts for editorial staff and it appears that, currently, they have ten openings in three states. Here’s a chart comparing the jobs that Koch is trying to fill and those at MSNBC.

Of course, if the government adopted more sensible economic policies many more businesses would be investing in this country and adding jobs as well. Even though that hasn’t happened yet, Koch is still doing what it can to provide opportunities in manufacturing here in the US. Too many on the Left would rather attack companies that are creating jobs in this country — the very companies that generate the type of growth our economy needs. Maddow and her team are a sad example of this misguided thinking.

I guess they’re still working on the comparison chart that shows how many people MSNBC has tried to put, or keep, out of work.

Now, while I agree with Maddow in the macro, the Koch response was comparatively mild, and I don’t understand the objection to crediting Laura Conaway. If it had been me they were going after, I’d have been offended if they didn’t use my name. As “intimidation” goes, this is bringing an intellectually lazy toy gun with a flag that says “Bang!” to a knife fight.

So why the over-the-top, Sigourney Weaver in Aliens reaction? Maddow certainly isn’t thin-skinned, given her status as favored fundraising magnet of Republicans everywhere. Being considered your opponent’s Great Satan is a feature, not a bug. No, Maddow’s reaction is borne out of a canny understanding of leverage.

Maddow has gotten Koch Industries to engage her publicly, and while that’s a big win for her, responding to it correctly is crucial to maximizing that win. Her producer’s blog post obviously struck a nerve with Koch’s PR department, which means they care, at least a little bit, what people think about this. By casting them as cheap bullies in this feud, which matches up well with the company’s general Goliath-ishness, Rachel Maddow is maximizing her chances of drawing Koch out a little more.

This probably won’t result in any “manning up” (challenges like this rarely do), but every time Koch Industries punches down at Maddow and her audience, it’s a win for her.

Here’s the clip, from Thursday night’s The Rachel Maddow Show: