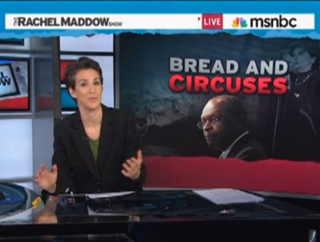 On her program last Friday, Rachel Maddow announced she thinks she has finally figured out this whole “Herman Cain” thing: it’s a performance art project. The bizarre events of today, hosted by Gloria Allred at the Friar’s Club and hijacked by the Howard Stern show, naturally, seemed to fit the theory, though not, Maddow explained today, in that Cain was behind the entire thing, but in that the art project was working so well, that Howard Stern was getting jealous.

RELATED: Maddow Kicks Herself For Not Realizing Herman Cain Is A Performance Art Project

Maddow began her coverage of the press conference today with the strange pre-conference conference held by Howard Stern personality Benji Bronk, who insisted on shilling for a pop star of some sort named Elisa Jordana, who exists (“we fact-checked it!” Maddow noted). While she thought it may have just been the continuation of what had become something of a tradition for Bronk– he was, after all, the one who interrupted the Anthony Weiner proceedings– Maddow had another, more damning theory. “Maybe,” she contended, “this is just the greatest long-running, gross-out, genius performance art satire radio spectacle of my generation, The Howard Stern Show, being jealous that another performance art sensation is hitting that Howard Stern sweet spot that is between horrifying and compelling.”

Maddow then noted that the Cain “Art Project” had entirely denied the allegations as they were being spoken to the press, and that they had continued to boast the allegations were making them money, particularly with a tweet welcoming Gloria Allred to the 2012 Republican campaign. While Maddow only reported on the conference without predictions, she concluded the segment eager to see how the entire story unfolded.