MSNBC’s Rachel Maddow: This Is The Worst Music Video I’ve Even Seen 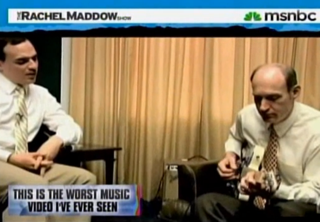 You’d be hard-pressed to find a collection of seven consecutive days more chock full of horrendous music video “art” than this week, but Rachel Maddow has somehow found something bizarre, crappy, and inappropriate enough to win this week’s “worst music video ever”: Rep. Thaddeus McCotter playing “Satisfaction” on an American flag guitar while lamenting that Silvio Berlusconi got caught sleeping with underaged prostitutes.

Maddow has to reiterate several times in the following clip that “yes, this exists. I did not make it up.” At some point, it becomes hard to believe her. Unlike, say, James O’Keefe‘s brave foray into ’80s Italodisco (and or ’90s George Michael protest music) which, while probably ill-advised, descends to so-bad-it’s-good levels, Rep. McCotter seems to miss out on both the humor and the absurdity while casually promoting underaged prostitution. The guitar sessions are a series in which his sidekick asks him questions that he answers while strumming the guitar.

In this segment, the sidekick asks for the Congressman’s thoughts on Berlusconi, adding, that he would lament seeing “such an ardent supporter of the democratic process go down in flames” over the scandal. Rep. McCotter, playing “Satisfaction,” suddenly stops and says “I can’t play that because evidently he’s found satisfaction by all accounts,” then praises Berlusconi as “an ally of the United States,” and agrees that he hopes “such a fine leader is not undone by a scandal such as this.” Yes, this idea probably worked better in theory than in execution.