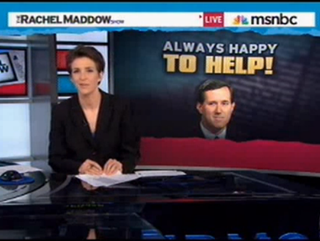 Rachel Maddow keeps finding herself in Republican politicians’ fundraising pleas. Her latest cameo appeared courtesy of Rick Santorum, who asked for money to help fight the “smut” she peddles against him, but she has been here before. Delighted to be mentioned yet again by someone she admits to thinking of “as kind of a bigger deal” than herself, Maddow took a trip down memory lane, to an Ohio GOP robocall calling her a “cross-dressing ultra-liberal lesbian from NYC.”

That last one, Maddow admitted, as the fund-raising plea attacking her “that means the most to me, I think,” because at the time she was a barely-known talk radio host. The candidate, Bob Ney‘s, opponent had visited her program, and so, in a robocall, voters were told he had participated in a “show from New York City hosted by a cross-dressing lesbian.” Maddow reported with glee that this robocall occurred shortly before Ney “had to go to prison in the Jack Abramoff scandal.” “One of his last political acts,” she notes, “was to call me a cross-dressing ultra-liberal lesbian from New York City.”

Then she turned to the matter at hand– Santorum, who she notes lost his last election by 18 points and is trailing in funds behind the “head of a mafia-themed pizza chain,” among others. Using her name, she says, Santorum is now “trying to make sure that everybody” Googles him. Highlighting the long, enraged email that mentions her and describes in euphemism what happens when you search his name. He does so, however, in a way that makes the prospect of Googling him all the more tempting. If you got said email, Maddow asked her audience, “would you run to your checkbook, outraged by the mere mention of these liberal names… or would you, out of curiosity, Google Santorum?”

“It is very flattering to have people try to raise money off of the sheer outrageousness of the mention of your name,” Maddow noted, and “it’s also hilarious,” so, Maddow concluded, Santorum was free to use her name to publicize his Google problem.