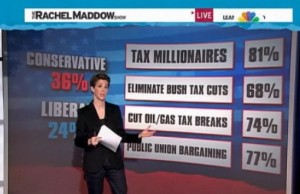 One of the things that sets Rachel Maddow apart from the rest of the opiniotainment universe is the fact that she holds strong, smart opinions, while managing to be nice about it. That generosity of spirit was on display Wednesday night, as Maddow broke down the inconsistencies in a recent NBC News/Wall Street Journal poll, and concluded that Americans vote against their own interests because of an “expensive re-branding campaign.”

Rachel Maddow is too nice to tell Americans they’re idiots, but I’m not.

Maddow began her show by listing some liberal (by today’s standards) policy ideas, like a surtax on millionaires, ending tax breaks/subsidies for oil companies, and allowing public unions to collectively bargain, then revealed that, in that recent poll, Americans supported all of them at levels usually reserved for questions like “Are puppies cute?”

She then wondered why many more Americans identify themselves as conservative, rather than liberal (by a 36-24 margin), chalking it up to conservative “re-branding.”‘

I think Maddow is identifying a real phenomenon here, the combined reluctance of people to call themselves “liberal” (even many liberals prefer their own New Coke moniker, “progressive), for fear of being associated with people who won’t hit their kids or take a bath, and think trees are people too, and the alluring steadiness of the word “conservative.”

But that only explains the difference between what people think (as reflected in this poll), and what they call themselves. It doesn’t explain why the same people who favor taxing millionaires by 81%, ending Big Oil’s taxpayer-funded gravy train by 74%, and ending the Bush tax cuts by 68% just overwhelmingly voted for people who will never do any of that. In fact, they voted for people who campaigned on never doing any of that, even if it meant doing nothing.

Re-branding has nothing to do with it. It doesn’t matter how pretty the package is, if the label says, in big letters, “I Will Taste Gross To You,” most people will buy something else. Only a complete moron says, “Hmmm, maybe this will be the pile of horseshit that magically tastes good.”

But the most egregious stupidity on display is the overwhelming support, in poll after poll, in favor of collective bargaining rights for public workers, again by the same people who either stayed home in November, or swept a tidal wave of Republicans into office. What did you think they were going to do? Hoist “Norma Rae” signs over their heads on the floor of Congress?

While it’s tempting to agree with Winston Churchill‘s assertion that “The best argument against democracy is a five minute conversation with the average voter,” it’s still better than twenty seconds of this guy, and many others like him.