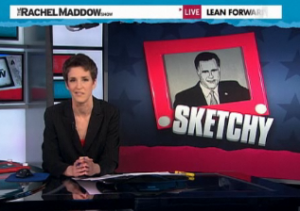 In the wake of the Romney campaign’s Etch A Sketch gaffe, Rachel Maddow tore into Mitt Romney in a segment Wednesday night, chronicling his long history of constant lying. Noting “this is not a normal amount of politician lying,” Maddow attacked him as a candidate running on “utterly unashamed, unprecedented deceit.”

Beginning by drawing similarities between Romney and an Etch a Sketch, Maddow dove a bit into the history of the toy, noting although it was once manufacturing on American soil, the process has since been outsourced to China where workers receive low wages even by local standards. At the time, the move caused controversy, including criticism from Toys R Us — which is owned by Bain Capital (co-founded by Romney). Like the toy, Maddow said, Romney has “a documented history of firing American workers and sending their jobs to other countries that have really horrible working conditions.”

But “most importantly,” she said, Romney — like an Etch a Sketch — has “a history of erasing his old supposed principles, when it’s convenient, and writing new ones to meet new political needs.” That’s why this gaffe was one of the most, “if not the most,” significant gaffes of the campaign. He even lies “about the stupid stuff!”

Maddow then launched a full-on assault, juxtaposing clips of Romney to show his constant lying. She began by playing several instances during which he said President Obama has made the recession worse — which he hasn’t — and followed that clip with one of a reporter asking why he says so when it’s not true. Romney’s answer? That he never said that. He “lied about the economic record of the country and, when pressed, he lied about his lie,” Maddow exclaimed.

Maddow continued: Romney said he “left the world of politics” for business after serving as governor, when in fact, he launched his first presidential campaign a month after leaving. And then there’s his denial that “Romneycare” was in any way a blueprint for “Obamacare,” when a USA Today piece — penned by Romney himself — states, “President Obama could learn a thing or two about health care reform from Massachusetts.”

She ended the segment even more forcefully:

He lies all the time, really easily…arguably more than any modern candidate for major office, and there are a lot of creeps among them. […] There’s no reason that the whole country can’t, in this next election, have a great debate about our collective future.

She continued that such a dialogue requires honesty — and the most probable Republican nominee seems alarming unfazed by his own dishonesty:

And at least for now, the man who is most likely to win the Republican presidential nomination really seems unwilling to do so and untroubled by it. […] But what is more radically inappropriate on a systemic, institutional level for us as Americans, is that a man who may well take the oath of office in ten months is choosing to get to that podium on a foundation of utterly unashamed, unprecedented deceit.