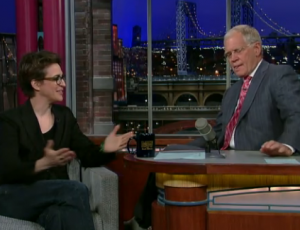 MSNBC’s Rachel Maddow appeared with David Letterman last night and she parted ways with many prominent liberals who were throwing Congressman Anthony Weiner overboard and calling for his resignation. Instead, Maddow argued that demanding Weiner’s resignation was truly hypocritical of the Republican party. Letterman also refrained from being too judgmental of Weiner, but because he humorously admitted “I’m not the best person to be commenting on sexual morality.”

When Letterman asked Maddow how big of a story the Weiner scandal should actually be, she responded:

“If he resigns it is something. And the fact that people are demanding that he resign while other people who have confessed to much worse things in terms of sex scandals are not being forced to resign or having their resignations called for, that makes it news. But him screwing up his marriage, in itself I think is more gossip than news. This is not a matter of political hypocrisy.”

Letterman, however was skeptical, thinking Weiner’s bad judgment seems like a real issue:

Maddow agreed that apologies from Weiner were warranted and said she wasn’t pleased Weiner lied to her face when interviewed, yet continued to wonder why past bad behavior of Republicans were “less of a scandal than Anthony Weiner has bad manners on Facebook?”