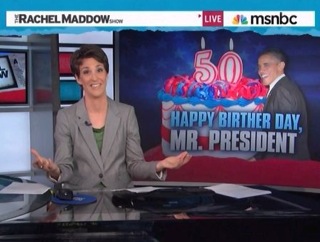 President Barack Obama turns 50 today– half a century since he was born in Kenya, his parents forged a fake newspaper announcement in Hawaii, and the Democratic state committed fraud to reproduce and archive a fake birth certificate. This was the well-wishing the President got from Rachel Maddow tonight, who took the opportunity to put together a look back at birther madness and the headline makers who kept it in the news.

Maddow began with a short history of Barack Obama’s birth according to birthers– the pregnancy, the mysterious flight to Kenya, and the massive fraud that would have had to be committed in order for a foreign-born baby to have been accepted enough to be President. “Why would they give birth in Kenya and not Hawaii?” Maddow asked, “I don’t know!” But somehow, the President’s parents “knew in 1961 that this baby would be president one day,” and so somehow added a fake long-form birth certificate to the Hawaii archives.

She then noted the long list of Republicans who had contemplated that the theory was true, stopping for a bit longer on, of course, the Donald Trump saga, and giving special shout-outs to noted birthers Orly Taitz (who is apparently still on the case) and the folks at WorldNet Daily. Noting that she never thought it would end, the real birth certificate, she concluded, did its job: “It did put it to rest. I was wrong.” Except for, of course, Rush Limbaugh‘s birthday greeting yesterday morning.