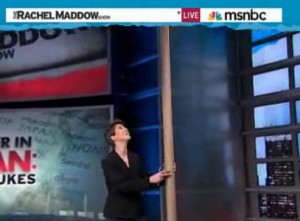 As the nuclear crisis in Japan continues to unfold, cable news has tried, with varying degrees of success, to explain what’s happening within the imperiled nuclear facilities. From a news consumer’s point of view, MSNBC’s Rachel Maddow has been doing an admirable job placing the crisis in clear layman’s terms. On Monday night’s show, she continued that work using a cardboard tube, and an interview with nuclear engineer Dave Lochbaum that raised some alarming possibilities.

Earlier on Monday, Glenn Beck also did a pretty good job of explaining the mechanics of a meltdown using tubes of M&Ms, but between the time that Beck declared a meltdown “with each passing minute becomes less likely” and Maddow’s segment, things changed. As Maddow’s guest, and later, reporter Robert Bazell, pointed out, Japanese authorities have been unable to answer key questions about the third explosion at the imperiled nuclear facility. If you saw Beck’s segment, the “pressure cooker” that holds the melting tubes of M&Ms may, or may not, have been breached by the explosion. Even more frightening is the uncertainty Lochbaum raises that, if the “pressure cooker” is damaged, workers at the nuclear plant might not be able to continue efforts to cool the reactors. From MSNBC:

Even since Maddow’s segment, reports have surfaced that a fourth reactor is now on fire, and has released an unknown amount of radiation, and Japan’s Prime Minister has widened the evacuation zone from 12 to 20 km. One key question that Maddow’s report left unanswered has been answered. According to Prime Minister Kan’s spokesman, efforts to cool the reactors with sea water continue, despite increased levels of radiation.

Opponents of nuclear energy have seized on this crisis to cast doubt on the future of nuclear plants in the US, but I find myself in rare agreement with Sen. Mitch McConnell, who said Sunday, “I don’t think right after a major environmental catastrophe is a very good time to be making American domestic policy.”

As Beck pointed out earlier, this is about the most extreme test you could ever put a nuclear plant through, and if the Japanese manage to avert a catastrophe, it will cut greatly in nuclear energy’s favor. If not, then the consequences will need to be weighed against our ability to improve nuclear safety. Either way, this is not the time to have that conversation.