Rachel Maddow’s Nuclear Power 101: How The Japanese May Contain Their Disaster 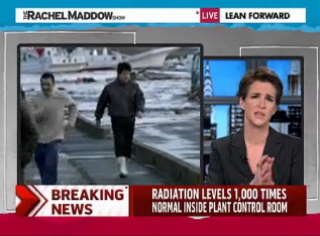 Rachel Maddow admits she’s not a nuclear physicist, but she has a pretty good grasp of what is going on in Japan right now. On last night’s show, she went into detail on how a nuclear power plant actually works, and how it is, to her, a “very expensive way of boiling water.” It’s a little more complicated than that, but that’s why she enlisted the help of an actual nuclear physicist to explain how, if at all, Japan could avoid a nuclear disaster.

Explaining in detail how water gets into a nuclear reactor, comes back out carrying heat and generates electricity, Maddow expanded upon the basics of nuclear power to explain the specifics of what is going on in Japan. Fukushima Prefecture runs two nuclear power plants, dai-ichi (Plant 1) and dai-ni (Plant 2), and had initially reported an emergency only within three reactors at dai-ichi. Now they have reported emergency situations in both, according to physicist Edwin Lyman, who told Maddow he is “less reassured by every update.” While at least 10 reactors were offline as of last night in Japan, only those two have been reported to give problems. While Maddow also declined to get into judging the work of the Japanese government in combating this situation, Lyman did note that the late announcement of the dai-ni situation “indicated that authorities were not up-front” such that it made him wonder what else they were hiding.

The segment is a great primer for those that aren’t too well-acquainted with the way nuclear plants work and their history. Lyman concludes with comparisons of the Chernobyl disaster to the Three Mile Island emergency and what went wrong in both.