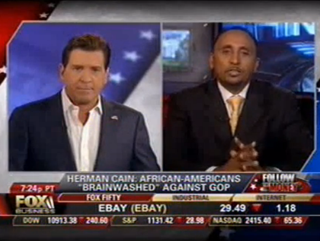 Herman Cain is causing quite a stir these days– whether it’s winning straw polls or attacking fellow candidates, or telling black people that they are “brainwashed.” That last comment, naturally, got him into some hot water with the black community, and on last night’s Follow the Money, Eric Bolling tried to parse through it with radio host Garland Nixon, who thought the comments extremely “closed-minded.”

Nixon based his assessment of Cain as closed-minded around the fact that he could not “understand a simple difference in policy” as independent thought and not brainwashing. He added that, as many in the black community are of working class, “they are voting their interest.” Bolling then turned to the response to Cain’s comments; namely, the response from Janeane Garofalo that Cain is serving as an agent to hide far-right racism. “If I were to say something like that, I would absolutely be destroyed in the media,” Bolling responded, alluding lightly to some racial comments that have gotten him in trouble in the past. Nixon tried to explain Garofalo’s comments as not inherently racist, but that there was some truth to those words. “Herman Cain is the Tea Party’s black friend,” Nixon argued, evoking a trope most hilariously embodied by Stephen Colbert and suggesting that “we can’t deny that there is something of a racist element on the far right wing.”