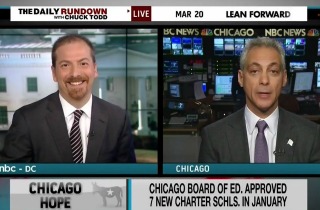 On Thursday, Chicago Mayor Rahm Emanuel Joined MSNBC host Chuck Todd where he was pressed on his administration’s education policy and his position on charter schools. After Todd asked Emanuel if the city was moving toward an application-based public school system, Emanuel took a swipe at Todd and said that the thin air in the nation’s capital might be “affecting your brain.”

“A charter school can pick and choose their students,” Todd said. He said that there is the potential for charter schools to create a situation in which public schools retain only the most underperforming or special needs students.

“You’re kind of looking at this in the old debate,” Emanuel replied. “This is not about a charter versus neighborhood. It’s about high quality choices for parents.”

RELATED: Michael Eric Dyson: Charter Schools an ‘Attack on the Civil Rights of All Children’

“So, is this where public school is going? Everything is going to be application-based?” Todd asked.

“No,” Emanuel replied. “You know, Chuck, I’m going to get you a one-way ticket out of Washington. You need to get out of the thin air. It’s affecting your brain.”

“Your debate reflects what happens in Washington, which is you miss really what’s going on on the ground,” Emanuel added. He repeated that a mix system of charter and public schools create choices for parents and have resulted in increased graduation rates.