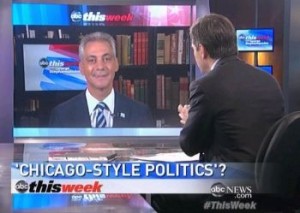 Chicago mayor and Obama campaign surrogate Rahm Emanuel continued the attack on Mitt Romney today over a lack of transparency on his tax returns, encouraging the Republican campaign to release more. Emanuel noted that Romney handed over two decades of tax returns to the John McCain campaign in 2008 when he was being vetted for the VP slot, and after seeing the returns, the McCain campaign decided that Sarah Palin would be a better running mate.

George Stephanopoulos asked Emanuel if he agrees with the notion put forth last week by Obama staffer Stephanie Cutter that either Romney has been lying about his tenure at Bain or he lied on SEC filings, which would constitute a felony. Emanuel defended the comments by saying Cutter was just following the law in her remarks, but more importantly, he told the Romney campaign to stop whining about what Cutter said because, as he argued, how would Romney deal with foreign leaders if this is his reaction to an opposition campaign staffer?

On the subject of Romney’s tax returns, Stephanopoulos asked what new information could be gleamed from releasing more returns. Emanuel pointed out that Romney’s own father advocated for disclosure, and made an interesting point about the returns when they were handed over to McCain campaign in 2008.

“He has only released one year, to the McCain campaign he released 23 years. And he’s telling the people, ‘I’m not going to give you what I gave John McCain’s people in 2008.’ And when he gave them 23 years, John McCain’s campaign looked at it and went, ‘Let’s go with Sarah Palin.’ So whatever’s in there is far worse than just the first year.”