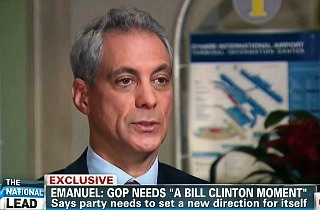 In a wide-ranging interview with CNN host Jake Tapper, President Barack Obama’s former chief of staff and mayor of Chicago, Rahm Emanuel, had some advice for the Republican Party. Ever a Bill Clinton loyalist, Emanuel said that the GOP can learn from the 42nd President’s successful rebranding of the Democratic Party after being shut out of the White House for more than a decade. Maybe Emanuel knew his advice to the GOP also contained within it a subtle dig at his former boss, President Obama. Clinton’s “new direction” was one that both Obama and his party’s voters soundly rejected.

Taking an extemporaneous stroll through history with Tapper, Emanuel mused that the financial collapse of 2008 and the Troubled Asset Relief Program (TARP) bailouts resulted in a populist backlash – primarily on the right, but also on the left – which “made our politics a lot worse.”

Focusing on the Republican internecine struggle, Emanuel advised the GOP to seek out and embrace a “Bill Clinton moment.”

“Our own party — 10, 20 years ago — faced this, and Bill Clinton set a new direction for the Democratic Party,” he continued. “As you know, I have a fondness for, I think, that kind of more pragmatic, progressive philosophy.”

And it was Clinton that forced his party, in the face of some resistance, out of the wilderness. After the electorate’s stinging rejection of Jimmy Carter and the 1980 election of Ronald Reagan, the Democratic Party had an image problem. While the Congress remained solidly Democratic over the course of the Reagan and George H. W. Bush administrations – a self-perpetuating residual legacy of the New Deal – the party spent the next two presidential election cycles fielding Carterite candidates. Each lost and lost big.

The party needed a new direction – one that would target and appeal to the “Reagan Democrats” the party lost over the course of the 1980s. Clinton, with the aid of the Democratic Leadership Council he led after 1990, embraced that third way. “A different kind of Democrat,” Clinton had no time for the voices in his party he found too extreme (the most famous being the artist Sista Souljah whose presidential admonishment has since become a catch-all term for political courage). Further, Clinton did not fight but embraced the message voters sent him in 1994 when they gave Republicans the control of the Congress. He moderated, moved right, and became the first Democrat since Franklin Delano Roosevelt to win a second term in the White House.

“Had it not been for the institutional success of the DLC, the New Democratic message would not have been articulated and Bill Clinton would have been a considerably less appealing and probably less successful candidate for president,” historian and political science professor Jon F. Hale wrote in 1995.

But for all his successes, the left wing of Clinton’s party bristled with contempt for him towards the end of the 1990s. Clinton, they told themselves, had squandered a once in a generation opportunity to advance a liberal agenda. Over the course of the Bush years, with the electorate tiring of Republican governance, the Democratic Party’s progressives gradually pushed their party in their direction. They found their ideological scion in Obama.

While Obama initially embraced Clinton’s team – elevating Clintonian figures like Emanuel, Leon Panetta, and Hillary Clinton to positions of prominence within the White House – he rejected the “third way” long before he took office. Indeed, Obama had been under pressure from liberal constituency groups to do so since his first campaign for U.S. Senate in Illinois.

As both Obama and his progressive base shifted away from the moderate path, the influence of centrist groups like the DLC began to wane. In the opening months of 2011, the organization which had delivered Democrats from the political wilderness announced it was closing shop.

POLITICO reporter Ben Smith wrote at the time that the DLC had been “tarred by the left as the symbol of ‘triangulation.’” While some predicted that the 2010 midterm “shellacking” would result in a shift in both tone and governance from Obama, a la Clinton in the wake of his party’s 1994 drubbing, that shift never materialized. When the DLC and its mission faded into history, Democrats did not seem to mind much. Indeed, it was a welcome development. Democratic centrism was dead, and good riddance.

Emanuel is more familiar with this tale than most. It is unlikely that he intentionally sought to take a swipe at the president, but that was the effect of his admonishment of the Washingtonian politics of which he was a part for the last 20 years.

Safely removed from the radioactivity of D.C., Emanuel is now free to speak his mind. Judging from this interview, it is unlikely the White House is going to welcome what he has to say.