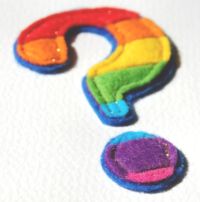 The Rainbow Sash Movement, a national Catholic GLBT movement, has announced that it disagrees with the petition organized by the Gay and Lesbian Alliance Against Defamation that aims to convince CNN to stop inviting guests and commenters from the “anti-gay industry.”

Here is the Rainbow Sash Movement’s full statement on the issue, emailed to us earlier today:

Like most communities we are very diverse. I just read your article on GLAAD’s attempt to control who may or may not appear on CNN. I think it is important to say that GLAAD has every right to its opinion as do other national LGBT organizations.

The Rainbow Sash Movement is a national LGBT Catholic Organization who disagrees with the GLAAD view, and will not support its petition. We believe that censorship is inappropriate when dealing with the hate in our society. Only by recognizing it, and making it visible can we begin to deal with it. In our opinion, hiding hate from public view can be very dangerous to life of healthy society. Ignoring hate will only enable it. Putting the media spotlight on it allows for a response from reasonable people.

We are opposed any form of censorship, and would encourage CNN to continue inviting who it chooses to address the issues of the day.

The petition – and the discussion surrounding it – brings up an important question when it comes to presenting – and, more specifically, curating – news for public consumption. Should media outlets create a clear, enforced outline for what, exactly, constitutes an expert? Does having a background in politics, or media, or academia automatically render a guest an expert on a particular subject, or should these qualifications be more specifically defined in light of a person’s, say, history or personal experience? And, then, what role does emotion and personal stake in an issue have on an individual’s ability to be a reliable and trustworthy spokesperson or advocate?

The discussion also calls to mind the recent trend of pundits and writers (Juan Williams, David Weigel, Octavia Nasr…) being penalized and losing their jobs for airing personal – and often controversial – opinions as experts. The real issue, then, is not whether CNN – or anyone else, for that matter – invites people who are qualified, professionally, to discuss contentious issues in an intelligent and thoughtful manner, but the role these people’s personal convictions should have in discussions presumably based on reason rather than emotion and personal passion, and whether suggesting that such views should be filtered or banned altogether works to, at best, silence voices that are vital and meaningful to such discussions or, at worst, censors and violates free speech.

Alternately, GLAAD’s petition can be read, in a more general sense, as an attempt to take media outlets to task for relying on sensationalism, hatred and hysteria to bring in viewers and amp up news stories, and for parading what amounts to entertainment as hard news worthy of debate and discussion.