Rally to Restore ‘Worst Persons in the World’ 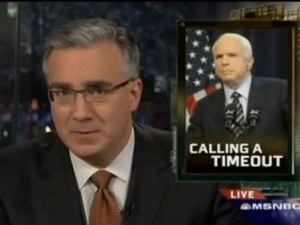 Countdown host Keith Olbermann, in a fit of (toned-down) pique at Jon Stewart‘s false equivalence of MSNBC with Fox News, announced tonight that he is “suspending” the “Worst Persons in the World” segment, with an eye toward killing it. To many of the show’s viewers, this is the best part of the show, and equating its elimination with taking the high road misses the point entirely. Don’t kill “Worst Persons,” just be the better person.

First of all, the very premise of “Worst Persons” is, on most nights, to satirize the very hyperbole against which Stewart rallied. Most of the “winners” aren’t actually the worst people in the world, but rather, people who did something stupid, ill-advised, or even something really bad.

There are times when Olbermann runs afoul of boundaries of taste, but these are as likely to be elsewhere in the show as in “Worsts.” If the concern is the pitch and temperature of the show’s rhetoric, Olbermann’s “Special Comment” segments would be a much more sensible target. Again, though, these are among Countdown viewers’ favorite moments, which make the show more than just another news rehash.

If Keith Olbermann is really concerned with mollifying Jon Stewart, he ought to take a more surgical approach. Rather than tossing out a whole segment, he ought to consider the individual merits of the criticisms leveled against him. Don’t make fun of disabled children, don’t call renowned (Jewish) First Amendment lawyers Nazis, don’t call women with whom you disagree “meatbags,” no matter what segment you’re doing. Don’t ask “Am I being too angry,” but rather, “Am I being too small?”

Sometimes it is okay to get angry. One of the things that propelled Countdown to the popularity it now enjoys was Olbermann’s often righteous, sometimes self-righteous, anger. The premise that he rejects in announcing the retirement of “Worsts,” that fighting Goliath isn’t the same as being Goliath, demands that anger, properly focused, appropriately unleashed. Bring back “Worsts.”