Rand Paul: ‘Appropriate’ That Snowden Should Serve a ‘Few Years in Prison’ 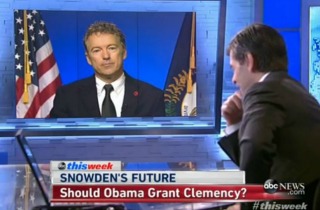 On Friday, Paul told Fox News Channel host Eric Bolling that Snowden and Director of National Intelligence James Clapper should “share a cell” for their infractions.

When asked to defend his statement, Paul said that Clapper lied to the American people and to Congress and should be held to account for perjuring himself. “I don’t think we can selectively apply the law,” Paul said.

He added that Snowden, while not deserving of a “life sentence” or “the death penalty,” should serve “a few years in prison” because courts have ruled that his leaks constituted illegal acts.

However, Paul said that Snowden’s leaks would be viewed though the lens of posterity as beneficial to the country while Clapper’s misleading testimony will be seen by history as a moment which eroded the public trust in America’s domestic intelligence apparatus.