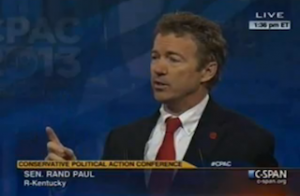 He didn’t speak for 13 hours, but Sen. Rand Paul (R-KY), brandishing two large binders as he took the CPAC stage, joked that he brought “13 hours worth of information.” He did go well over his reported 13 minutes of speaking time, possibly due to an enthusiastic crowd that appeared to still be fired up from his recent filibuster.

Early in the speech, when Paul said he was there to deliver a message to the president, one excited fan yelled out, “Don’t drone me, bro!” (a semi-obscure reference to a college student who shouted “Don’t tase me, bro!” to police who were trying to remove him from a John Kerry speaking event). Paul laughed, saying “that’s not exactly what I was thinking. However, I think he may have distilled my 13-hour speech into three words.”

Paul went on to accuse President Obama of no longer respecting civil liberties, citing his potential allowances for drone strikes on and “indefinite detention” of American citizens as prime examples. He then broadened out his defense of liberty to include economic matters, arguing for smaller government and less debt.

The White House’s recent decision to stop giving tours as a money-saving measure became a major object of Paul’s scorn. To loud boos from the crowd, Paul displayed outrage over the tours being canceled in the same week the State Department decided to give $250 million in aid to Egypt. “I say not one penny more to countries that are burning our flag,” he said.

He then cited examples of small scientific studies, such as building a robotic squirrel or examining how monkeys behave on methamphetamines. “Does it really take $3 million to discover that monkeys, like humans, act crazy on meth?” Paul asked to laughter from his audience.

Paul also continued the arguments he made in a recent op-ed targeting “millennials,” this time labeling them the “Facebook generation.” He received loud applause after this line defending decriminalization of drugs, an issue that hasn’t always been a pillar of the Republican Party: “Ask the Facebook generation whether we should put a kid in jail for the nonviolent crime of drug use and you’ll hear a resounding no.”

Arguing against large-scale government subsidies of any kind, Paul said, “There is nothing conservative about bailing out Wall Street. Likewise, there is nothing progressive about billion-dollar loans to millionaires to build solar panels.” He ended his rousing speech with the “stand with Rand” rhetoric of his filibuster, saying “I will stand for our prosperity and our freedom, and I ask everyone who values liberty to stand with me.”