Rand Paul Battles Savannah Guthrie: We Wouldn’t Be Here ‘If Harry Reid Had Done His Job’ 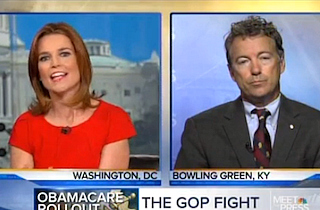 Senator Rand Paul (R-KY) sparred with Meet the Press guest host Savannah Guthrie over whether the strategy to defund or delay ObamaCare via the continuing resolution had been a worthwhile one, with Paul arguing that it had actually forced a more responsible method of federal funding via smaller appropriation bills.

“These are clean CRs, meaning there’s been no strings attached,” Paul said of the bills the House passed last week. “That’s historically the way it’s always been. You pass small appropriation bills so you can look at them individually. It’s actually a much better way to run government, because right now you’re sticking everything into one bill, and that’s why the leverage of shutting down the government occurs. But if you did things appropriately and you passed appropriation bills one at a time, no one would be able to shut down government ever. So if Harry Reid (D-NV) had done his job, we wouldn’t be in this position at all.”

Guthrie argued that since the previous forty-some attempts to repeal ObamaCare clearly showed that the cause was hopeless, tying ObamaCare funding to the continuing resolution guaranteed a government shutdown. Paul responded that it was President Barack Obama who was being intransigent.

“When you say the president wants 100% of ObamaCare, or he will shut down the government, that’s exactly what’s happened,” Paul said. “If he doesn’t 100% get his way, then they won’t do any spending bills that don’t include everything that he wants. That’s him unwilling to negotiate.”

“But why is it even a matter of negotiation?” Guthrie said, noting that the bill had passed all branches of government and been ratified in the 2012 election.

“It’s Congress’ job to oversee spending,” Paul said. “It’s not that it’s their obligation once something is law to never change it…It isn’t that it’s set in stone that we’ll never revisit Medicare or Social Security or ObamaCare for that matter, so I think it’s a silly argument for Democrats to say, ‘Oh, the law’s been passed, we can’t ever change it.'”

“But you have to propose something that can get through the House and the Senate and be signed by the president,” Guthrie said.

“Well, how do you know what will pass until you propose something and vote on it?” Paul replied.