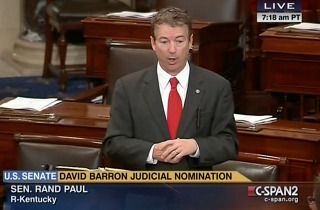 In a speech on the Senate floor on Wednesday, Sen. Rand Paul (R-KY) tore into President Barack Obama’s doctrine of executing Americans suspected of terrorism without due process of law. Paul cited a number of journalists, legal minds, and even Comedy Central host Stephen Colbert to illustrate why this policy is problematic.

Paul began by attacking the federal authorities citing the approval of secretly empaneled courts to review the evidence against suspected terrorists before they are executed on the battlefield. He said that this cannot be considered due process because the courts are not “independent” of the executive branch.

Paul asked if the White House plans on instituting some transparency in the judicial process now that the administration has released memos relating to the execution of Americans overseas. He answered “no.”

“I suspect that the next time they kill an American it will be in secret by the executive branch because that’s the new norm,” Paul said. “You’re voting for someone who has made this the historic precedent for how we will kill Americans overseas; in secret, by one branch of the administration, without representation, based upon an accusation.”

Watch the clip below, via C-SPAN 2: