Rand Paul: Civilian Deaths ‘Tragic,’ But No Difference Between Bullets and Gas 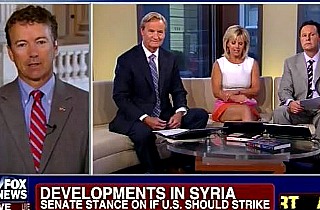 Sen. Rand Paul (R-KY) joined the hosts of Fox & Friends on Wednesday where he talked about his contentious exchange with Secretary of State John Kerry during Tuesday’s Senate Foreign Relations Committee hearing on the proposed military action against Syria. Paul said that he thought civilian deaths abroad, while a tragedy, are not a reason to go to war. He also told the Fox hosts that he intends to “lead the opposition” with a filibuster against the war in the Senate.

Paul told the Fox hosts that he would insist that a vote in the Senate which would either authorize or fail to authorize action in Syria be a binding vote. Paul said he was “proud” of the president for going to Congress, but he will insist that Obama abide by the Congress’ decision on attacking Syria.

He went on to say that chemical weapons are not a reason for intervention in Syria. “I think the main reasons that American forces should be asked to put their life on the line would be when American interests are involved,” Paul said.

“But what about chemical warfare?” Gretchen Carlson asked. “If a Republican were in office, would you have the same feeling about attacking?”

“Civilian death is an awful thing, whether it’s done with a machete, with a sniper machine gun or chemical death, 100,000 people died in Syria and now another 1,000 have died,” Paul replied. “They’re all tragic deaths, but I’m not sure they’re different because one came from gas and one came from a bullet.”

Paul told the Fox hosts that he would filibuster a resolution authorizing force in Syria in an effort to forestall military action there. He acknowledged, however, that a filibuster is unlikely to prevent military action entirely.