Rand Paul Compares Marco Rubio’s Immigration Plan To Obamacare: ‘I Hate To Bring That Up, But…’
VIDEO

Rand Paul Compares Marco Rubio’s Immigration Plan To Obamacare: ‘I Hate To Bring That Up, But…’ 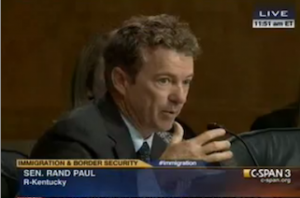 During a Homeland Security and Governmental Affairs Committee hearing Tuesday, Senator Rand Paul (R-KY) delivered some harsh criticism of his Republican colleague Marco Rubio‘s proposed immigration reform legislation. While Paul said that he’s “for immigration reform” in theory, he cautioned his fellow senators against moving forward with Rubio’s bill as it stands now and explaining why he thinks it’s “a little bit like Obamacare.”

Paul said his aim is to make the bill “strong enough that conservatives, myself included” as well as “conservative Republicans in the House” will vote for it. But, he said, he has some “concerns” based on the language of the bill itself. Summing up the legislation, he said, “you have to have a plan to build a fence. But, you don’t have to build a fence. If you don’t have a plan to build a fence, then you get a commission. I don’t know what happens if the commission doesn’t do anything. That’s the story of Washington around here.”

“To me,” Paul continued, “it’s a little bit like Obamacare. I hate to bring that up, but 1,800 references to ‘the secretary shall at a later date decide things.’ We don’t write bills around here. We should write the bill. We should write the plan. We should too these things to secure the border whether it be fence, entry, exit, we should write it–not delegate it.”

Though it may have seemed like Paul was trying to scuttle Rubio’s bill by comparing it to President Obama‘s Affordable Care Act, a law that is anathema for most conservative Republicans, he insisted he just wants “the bill to be better so we can pass it.” Paul added, “I think the stronger the bill is the better chance we have of passing it. My goal is to pass the bill.”