Rand Paul Confronts EEOC Bureaucrat: ‘How Can You Show Up to Work with a Straight Face?’

Rand Paul Confronts EEOC Bureaucrat: ‘How Can You Show Up to Work with a Straight Face?’ 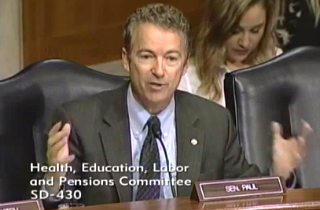 Sen. Rand Paul got a bit fiery on Thursday when given the opportunity to confront a bureaucrat who works for the U.S Equal Employment Opportunity Commission (EEOC).

While speaking during the Senate Committee on Health, Education, Labor and Pensions hearing on the nomination of P. David Lopez to serve as EEOC’s General Counsel, Sen. Paul expressed a heavy dose skepticism about the agency’s bureaucratic enforcement methods, wondering aloud how Lopez could do his job with a straight face.

“Do you realize the downside of the unlimited nature of going after people with no complaint and what this is going to do to business?” he asked Lopez. “Do you not understand what we’ve got to somehow balance that we want people to have jobs?”

The senator was especially incensed about the concept of the EEOC investigating workplaces that have no prior complaints about hiring discrimination. “You’re going after law-abiding people where there’s been no complaint,” he said, “and you don’t feel, at all, any compunction or guilty over what you were doing?”

He continued: “How can you show up to work with a straight face? I don’t understand how you wouldn’t resign immediately, and say, ‘This is abhorrent.'” The senator also accused Lopez of using the “bully nature” of his agency to “punish business.”

Paul was dismissive: “We’re going after mythology then.”