Rand Paul Explains Away Drone Flip-Flop On Hannity: ‘I Think I Was Misunderestimated’ 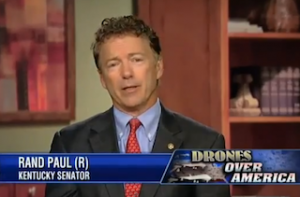 Senator Rand Paul (R-KY) has been doing a bit of damage control this week after he spoke to Fox Business Channel’s Neil Cavuto Monday night about his seeming change of heart on the issue of using drones to kill American citizens on U.S. soil. Once the backlash to Paul’s “flip-flop” was splashed across the top of The Drudge Report, the senator apparently felt he had no choice but to clarify his controversial remarks.

First, Paul released a short statement on his senate website, reading in part, “My comments last night left the mistaken impression that my position on drones had changed. Let me be clear: it has not.” He went on to explain that “armed drones should not be used in normal crime situations. They may only be considered in extraordinary, lethal situations where there is an ongoing, imminent threat.”

Last night, Paul went on Fox News’ Hannity in an attempt to put the “flip-flopping” narrative to bed once and for all. After playing a clip of Paul making the statement that gave his critics the most ammunition (“If someone comes out of a liquor store with a weapon and fifty dollars in cash,” he said, “I don’t care if a drone kills him or a policeman kills him”), Sean Hannity asked, “So, has Senator Rand Paul changed his position?”

Paul came out of the gate immediately denying any change in his position, saying, “It’s exactly the same position I expressed during the 13-hour filibuster.” Evoking the man who dominated the political media conversation yesterday, he said, “In the famous words of George W. Bush, I think I was ‘misunderestimated.'”

But was Rand Paul really simultaneously misunderstood and underestimated, which can only be the meaning of that legendary Bush portmanteau? He went to explain that he used the same liquor store example in his 13-hour filibuster and urged “left-wing bloggers out there trying to promote something” to look back at what he said. A look at the transcript of the filibuster shows exactly how he framed the liquor store scenario during hour three:

“If some guy’s robbing a liquor store two blocks from here and the policemen come up and he comes out brandishing a gun, he or she can be shot. They once again don’t get Miranda rights, they don’t get a trial, they don’t get anything. If you come out brandishing a weapon and people are threatened by it, you can be shot. So it’s important to know what we’re talking about. We’re not talking about the guy coming out of the liquor store with a weapon. Even a drone could kill him if the FBI had drones. So my objection to drones isn’t so much the technology. There may be a use in law – for law enforcement here. But there are also potential, great potential for abuses.”

So, yes, Paul did use the same example in his filibuster, but he also seriously undersold the scenario to Cavuto when it was simply someone “with a weapon and fifty dollars in cash,” a description that could describe a lot of people in this heavily armed country who would not be considered “imminent threats.” When Paul says drones shouldn’t be used in “normal crime situations,” where does he draw that line?