Rand Paul Fires Back At Filibuster Critics, Shocks Glenn Beck With Revelation He May Vote For Brennan
video

Rand Paul Fires Back At Filibuster Critics, Shocks Glenn Beck With Revelation He May Vote For Brennan 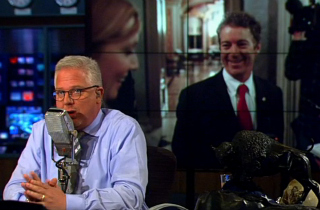 In his first interview since completing his filibuster early this morning, Sen. Rand Paul talked to conservative radio host Glenn Beck talked about his nearly 13-hour-long stand against the Obama administration’s authority to execute targeted assassinations of American citizens on U.S. soil.

Beck praised the senator as having stood up for principles without “throwing fireballs” at anyone. He asked Sen. Paul about the many skeptics who might say the filibuster was “nonsense” because of how unrealistic the scenario of the president assassinating an American on U.S. soil might be.

“If government were comprised of angels, we wouldn’t need rules,” Sen. Paul quoted James Madison. He explained that his crusade wasn’t so much about fearing President Obama’s use of drones domestically, but rather about future presidents using this expanded executive authority to carry out such actions.

The libertarian-leaning senator took the time to clarify that “we all agree” that lethal force can be used by the government when a combatant is “imminently using force” against people on U.S. soil. His concern, he said, is that if the government determines someone might be a threat, will the federal government decide to use lethal force without due process?

“This is an issue that does get people on the left and the right to unite,” Paul continued. He praised Democratic Sen. Ron Wyden for joining the fight despite their deep disagreements on other issues like economics. “We need to interest young people who are interested in civil liberties,” the senator said.

Later on, Beck and his crew threw critical quotes at the senator to get his reaction, including Sen. Lindsey Graham‘s dismissal of the filibuster as hedging on the “ridiculous” scenario of the president ever needing to assassinate an American citizen on U.S. soil.

“I agree it’s a ridiculous idea, but why then won’t President Obama say he won’t?” Paul responded.

He also addressed the WSJ criticism that he should “calm down” over a hypothetical scenario, arguing that while he understands the newspaper’s view on when lethal force is appropriate, the administration has not yet provided a clear definition of how far they’re willing to go to define an “imminent threat.”

When asked whether he planned to vote for John Brennan as CIA director, now that the filibuster is over, Paul shocked Beck by saying he will “give deference” to nominees he disagrees with for political purposes — i.e., he might end up voting for Brennan if he gets a sufficient response from the administration today.

“I won’t vote for him on any of the votes if I don’t get information from the White House saying they’re going to adhere to the Constitution,” he said.

Beck and his co-hosts winced at Paul’s suggestion, claiming that Brennan is simply “dangerous” and should not be confirmed for the CIA post no matter what. The senator agreed that Brennan would not fill the position well, but reiterated that his main goal was to get a clear constitutional answer from the administration regarding targeted assassinations.

“I disagree with you on that,” Beck said, “but you are very clear and you stand by your principles.”