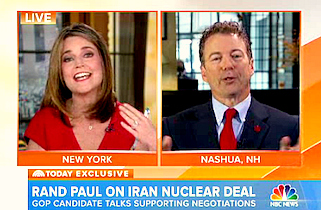 Senator and 2016 presidential candidate Rand Paul (R-KY) clashed with Today show host Savannah Guthrie after she asked whether his views on foreign policy had mellowed over the years, a characterization Paul took offense to. It’s the second time Paul has gotten heated with an interviewer over a question, the last coming when he shushed CNBC anchor Kelly Evans.

“You have had views in the past on foreign policy that are somewhat unorthodox,” Guthrie said, citing Iran, Israeli aid, and defense spending. “But you seemed to have changed.”

Paul tried to interrupt the list. “Why don’t we let me explain instead of talking over me,” Paul said, though he was the one who’d interrupted. “Before we go through a litany of things you say I’ve changed on, why don’t you ask me a question: ‘Have I changed my opinion?’ That would be a better way to approach it. You’ve editorialized.”

When Guthrie tried to rephrase her question exactly as he asked, Paul said, “No, no, no, no, no, listen, you’ve editorialized. Let me answer a question.”

Guthrie asked specifically about a statement Paul made in 2007 that Iran was not a threat. “2007 was a long time ago and events do change over long periods of time,” Paul said. “We’re talking about a time when I wasn’t running for office and I was helping somebody else run for office.”

Paul said he believed Iran to be a bigger threat now. “However, I am for negotiation over war, and I think I’ve been one of the reasonable people in our party who hasn’t been beating the drums for war,” Paul continued. “So I think my position on Iran is one that reflect the events.”