Rand Paul: GOP Not Reaching Out to African-Americans ‘The Biggest Mistake We’ve Made’ 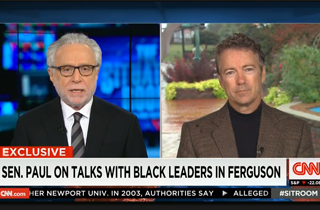 In an interview with Wolf Blitzer, Sen. Rand Paul (R-KY) spoke about his meeting with NAACP leaders in Ferguson, MO, and called on the GOP to start actually listening to the African-American community.

“I don’t want to characterize how everybody else feels about what I said, but I think it was a good opening to the conversation,” Paul said. “I think in the Republican Party, the biggest mistake we’ve made in the last several decades is we haven’t gone into the African American community, into the NAACP and say you know what, we are concerned about what’s going on in your cities and we have plans. They may be different than the Democrats, but we do have plans and we do want to help.”

Paul, who made waves after the death of Michael Brown with an op-ed calling for the demilitarization of the police, noted that his libertarian leanings and push against the War on Drugs made it “pretty easy” to work with the NAACP’s civil rights agenda.