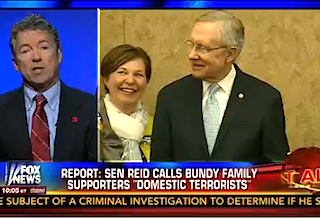 Eric Bolling picked up where Sean Hannity left off Thursday night when he filled in for the Fox News host Thursday night. After speaking to rancher Cliven Bundy by phone about the ongoing tensions between him and the Bureau of Land Management, Bolling gave Sen. Rand Paul (R-KY) the chance to be the “first 2016 potential candidate” to weigh in on this issue.

Bolling began the interview by asking Paul to share his reaction to comments made by Senate Majority Leader Harry Reid (D-NV), which referred to Bundy’s supporters as “domestic terrorists.” Paul said, “I think what we should all be calling for is for calmer heads to prevail. I don’t want to see violence on either side.”

“I don’t think calling people names is going to calm this down,” Paul continued. “I think it’s liable to stir it up. So I think all parties, including Senator Reid, should calm the rhetoric a little bit. Let’s try to have a peaceful resolution to this.”

That being said, Paul went on to criticize the federal endangered species laws that use being used to try to stop Bundy from raising cattle on the Nevada land. “It really is government overreach, government gone amuck with this Endangered Species Act,” he said, adding that the debate should be a legal and intellectual one and “shouldn’t be about violence of arms and I hope the government will not be there with arms and provoke a showdown and something terrible will happen.”

But Bolling came back by saying “the stage is being” set for such a violent confrontation, “maybe because of what Senator Reid just said.” Given Reid’s rhetoric, the host asked, “doesn’t that sound like he’s setting it up for maybe some more military action, more bringing some more feds in there, maybe having this escalate?”